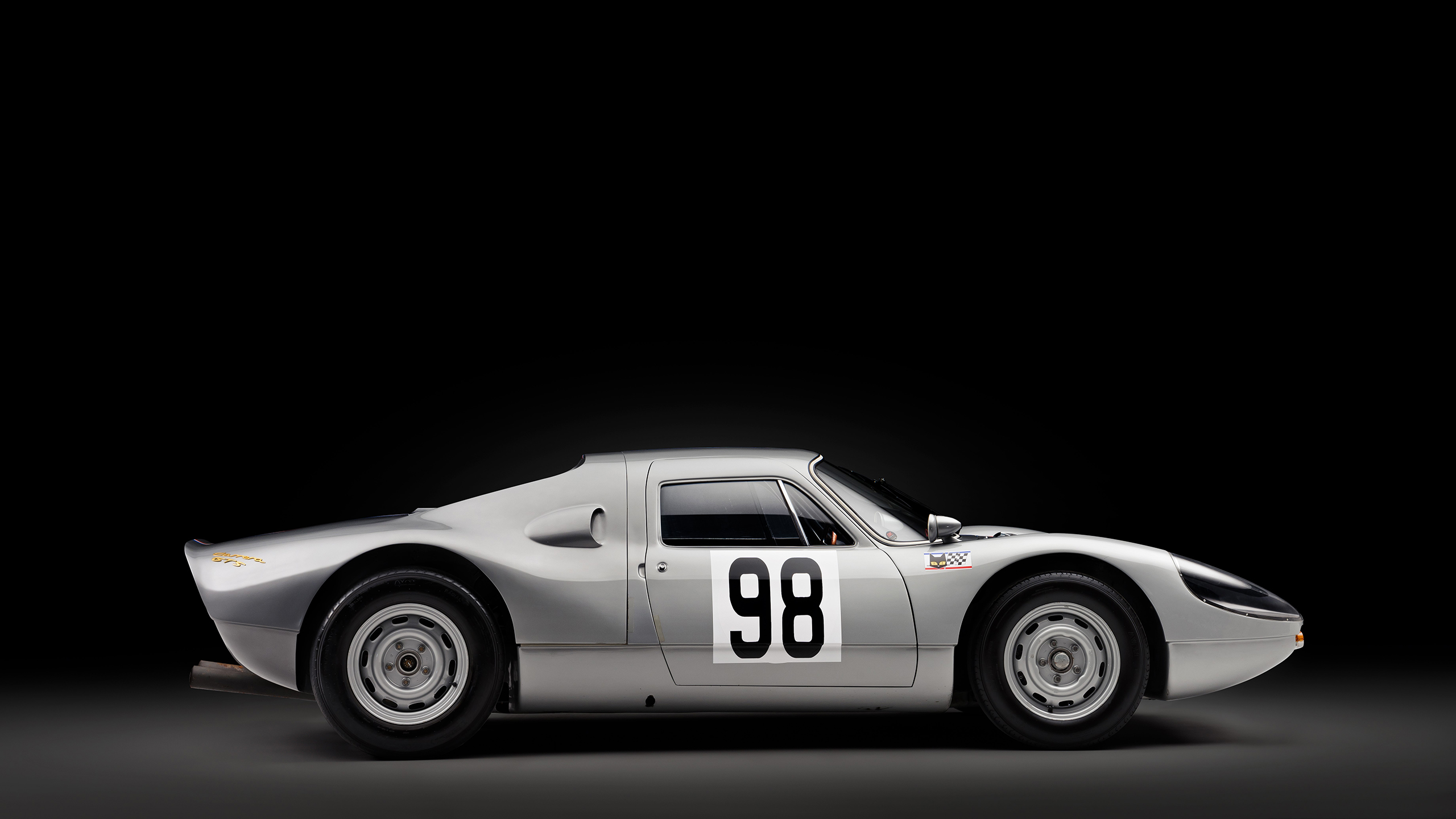 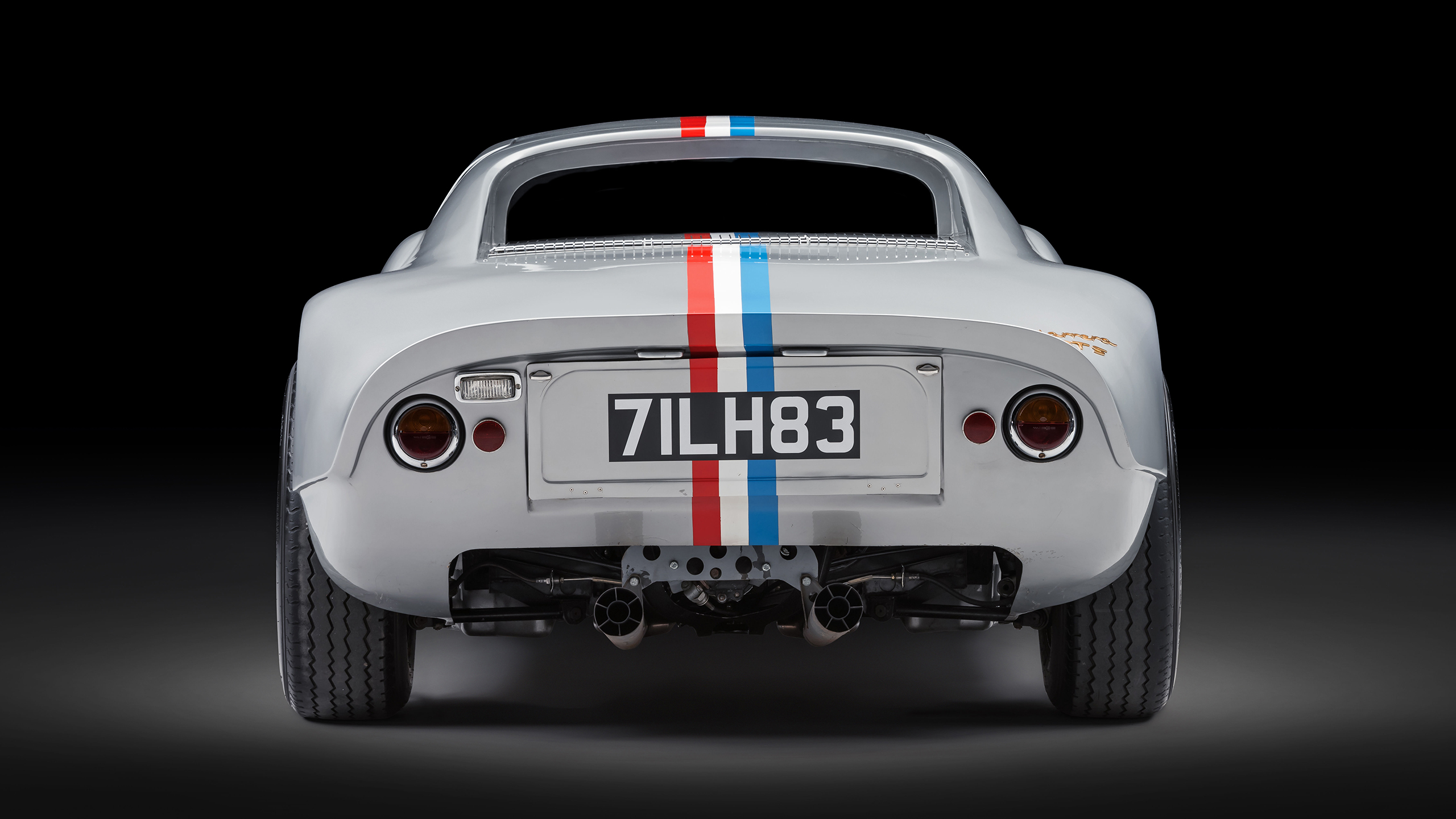 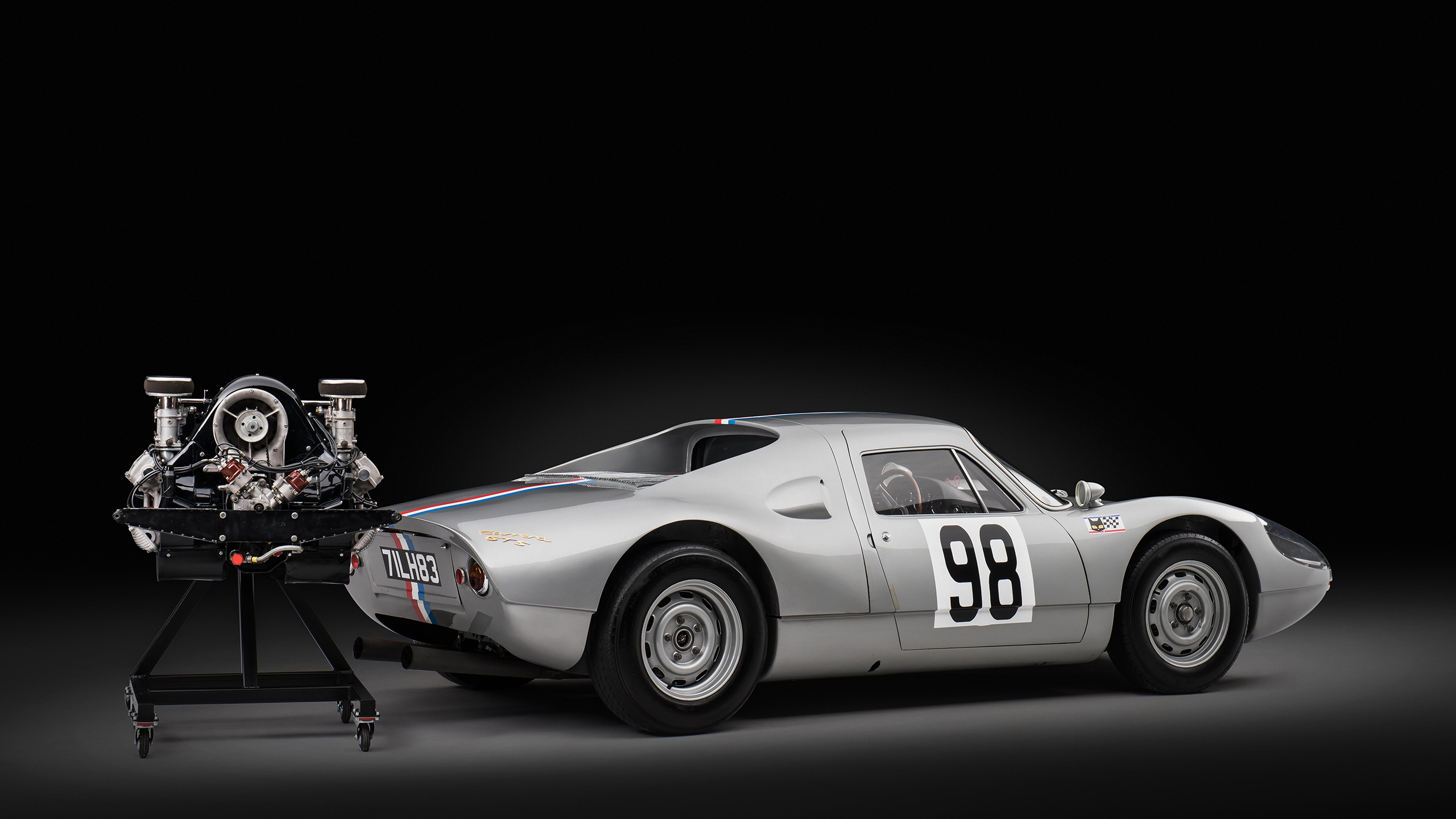 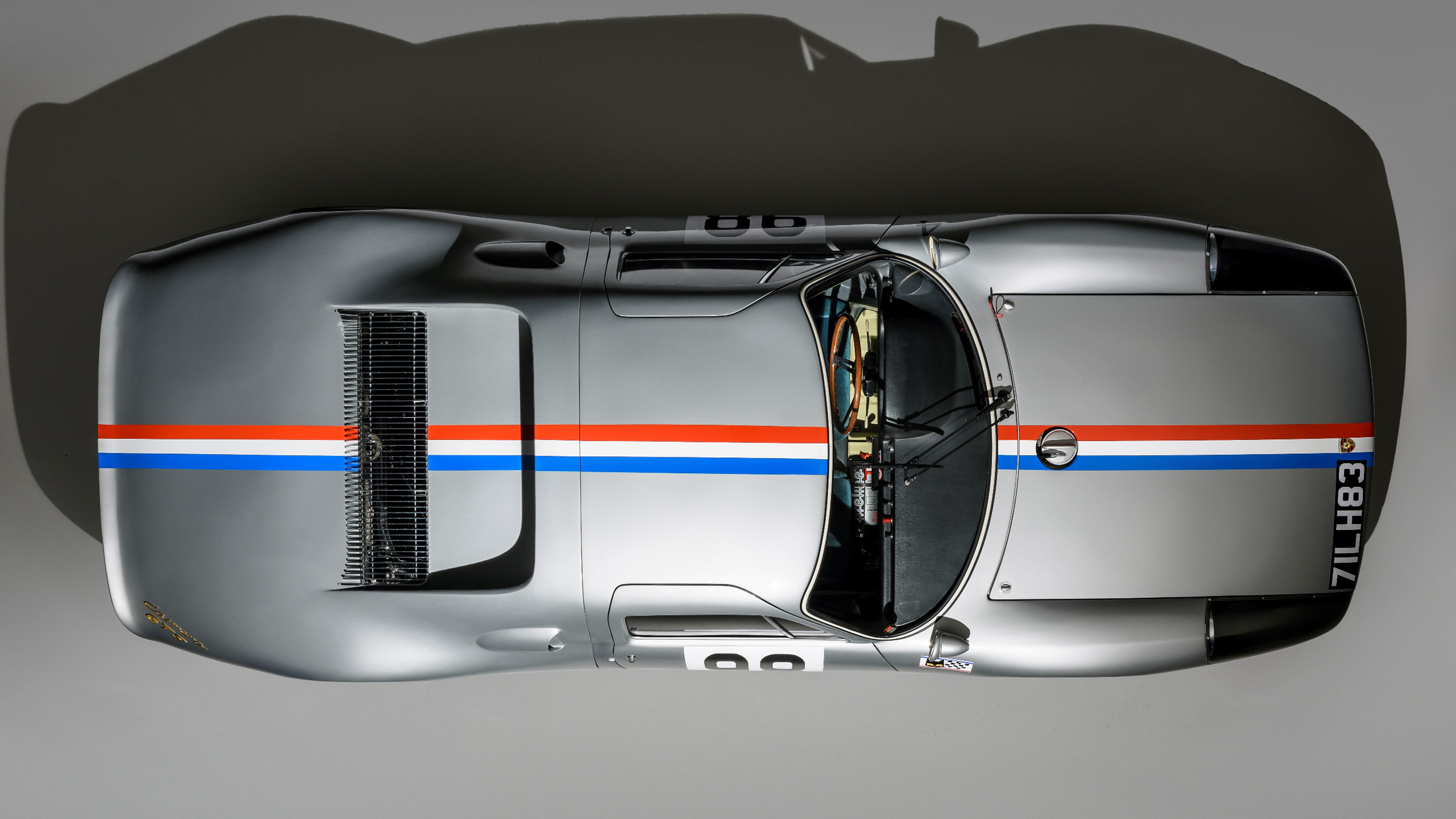 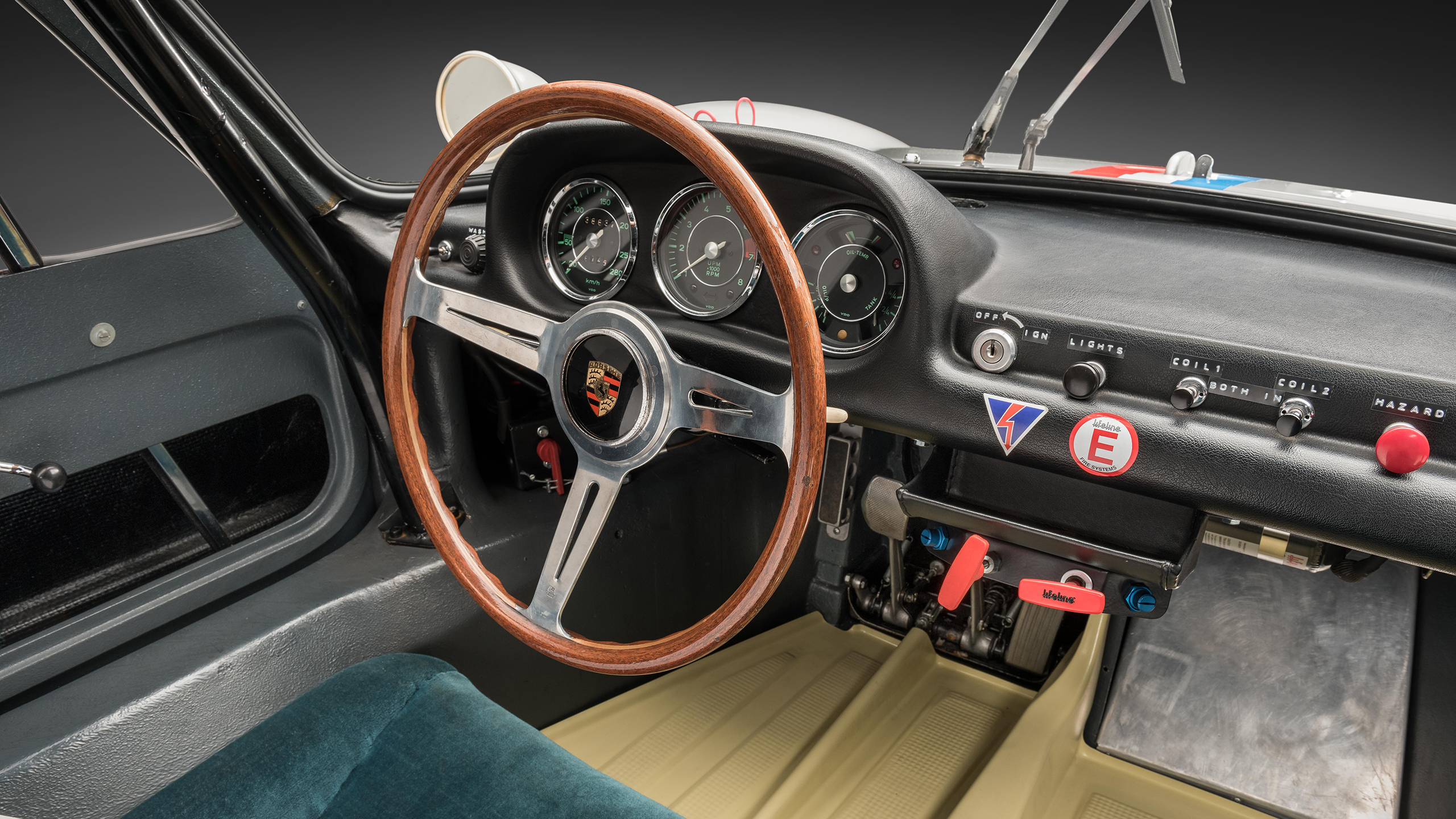 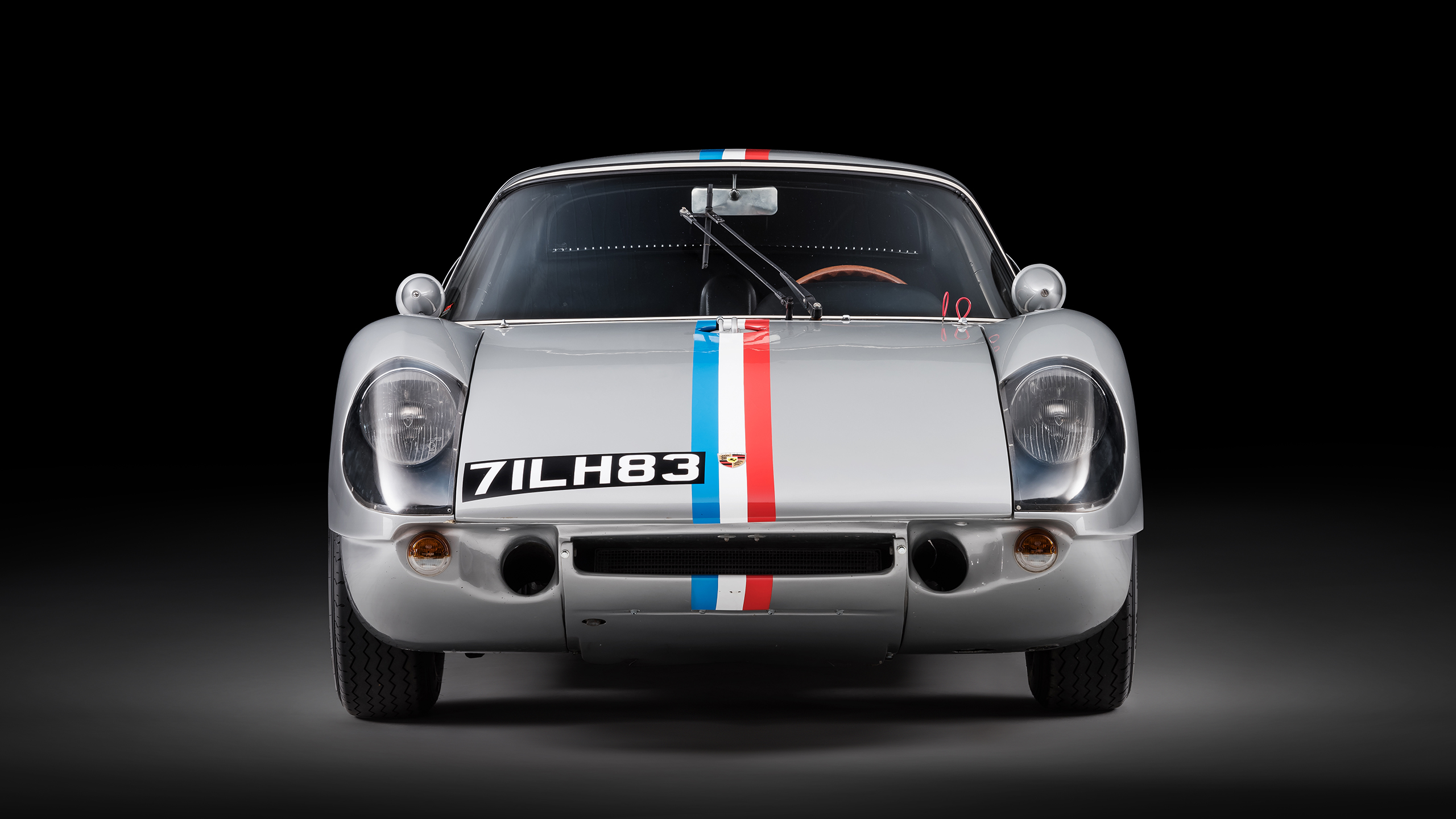 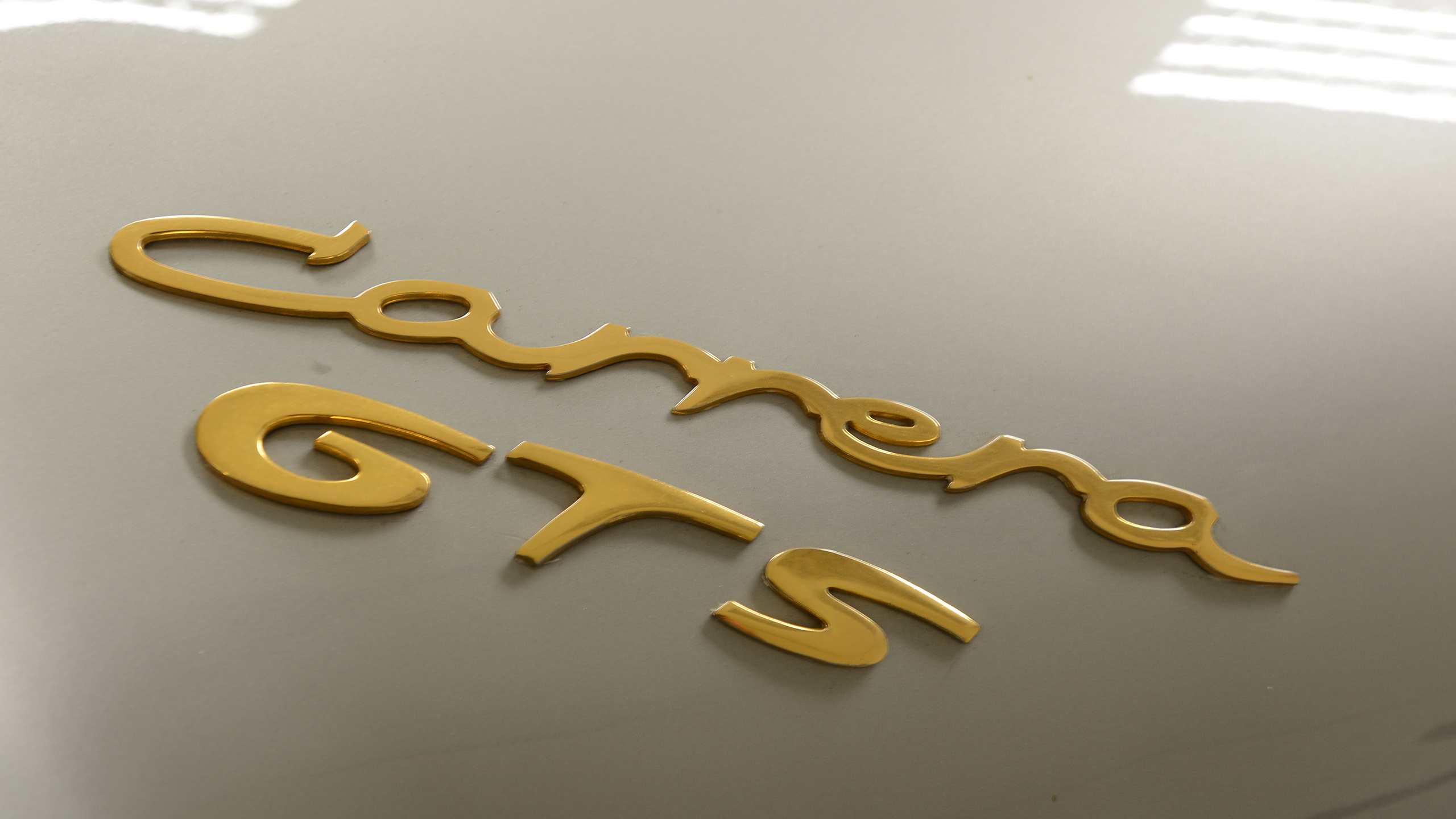 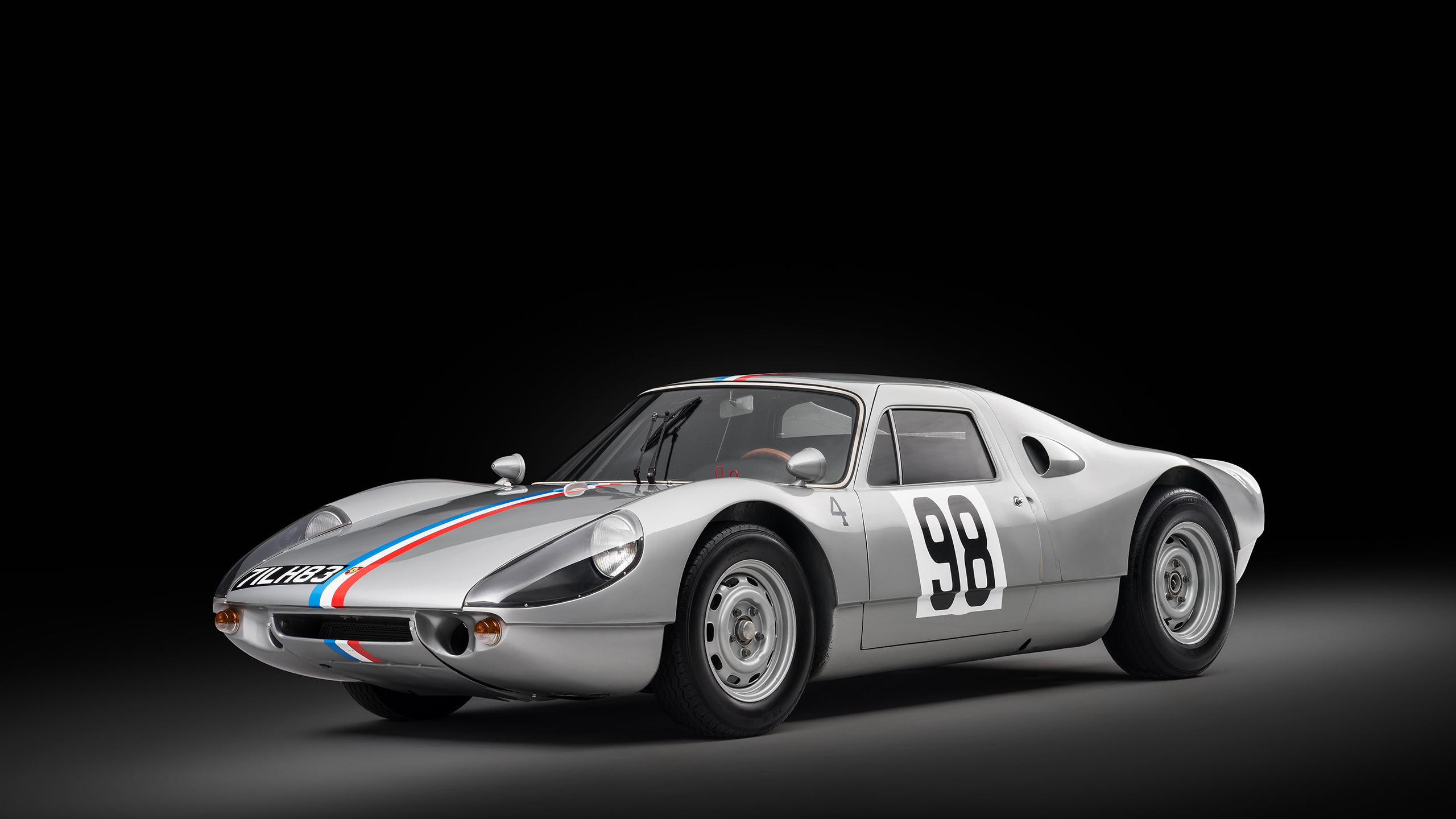 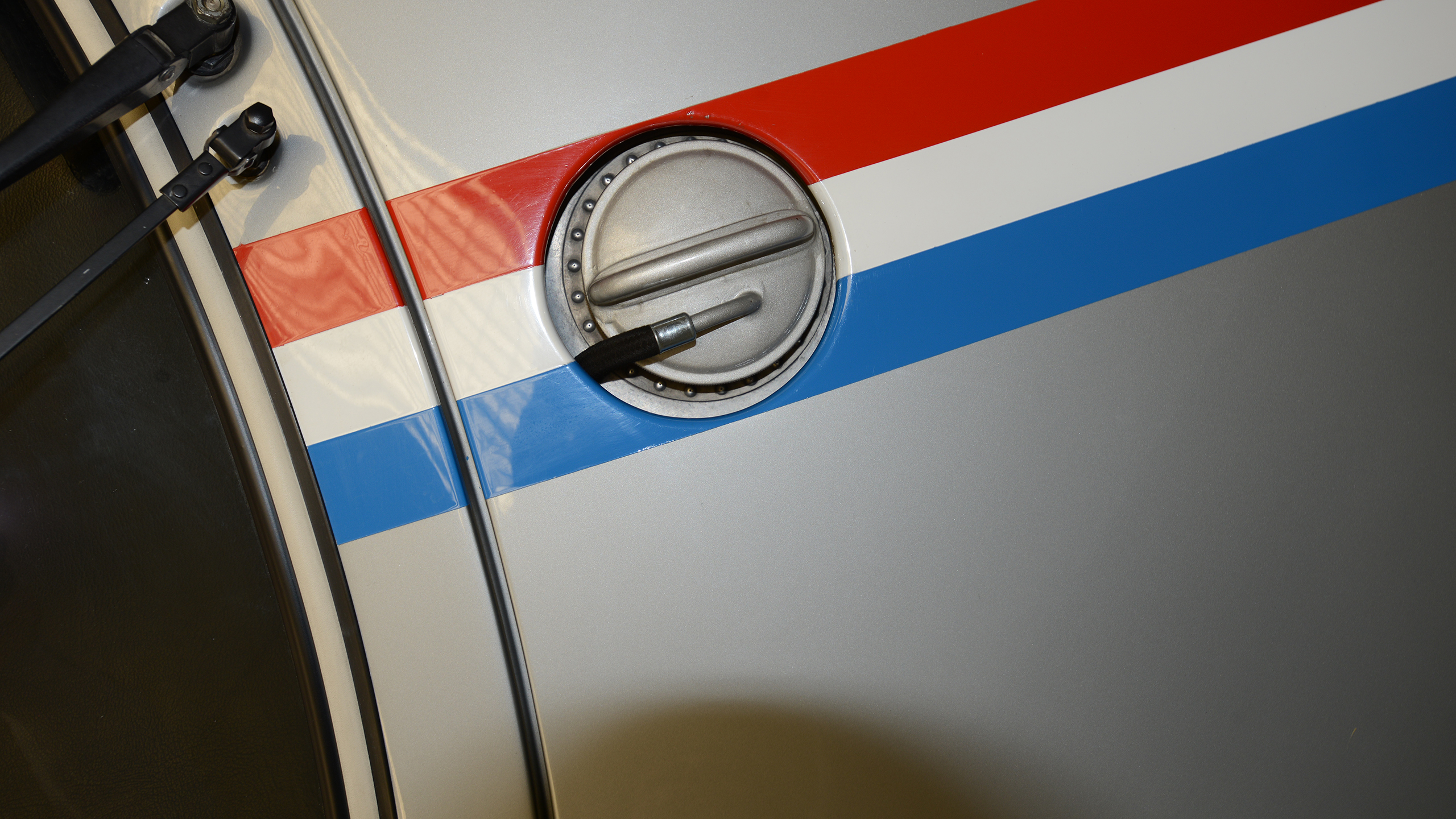 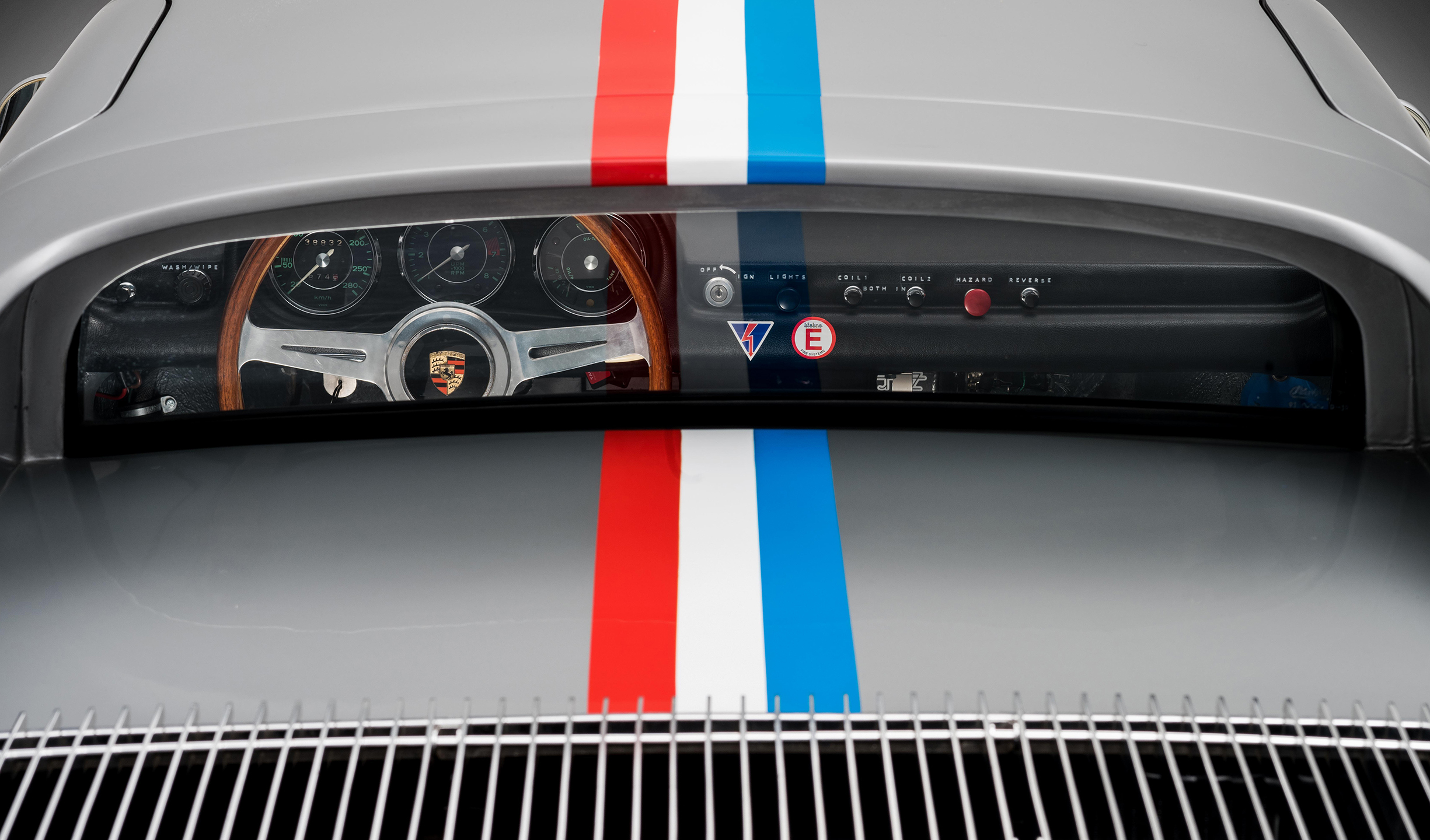 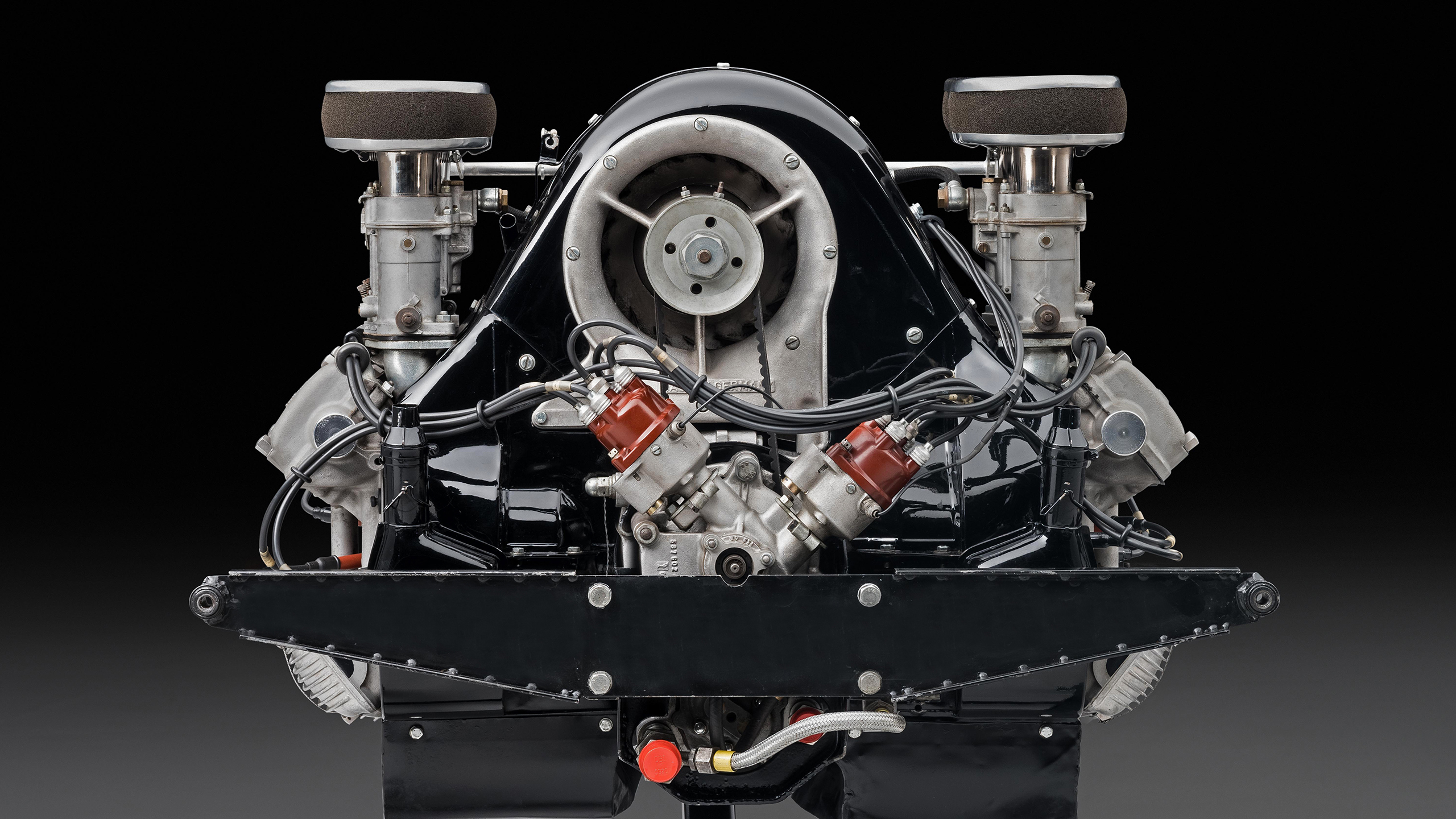 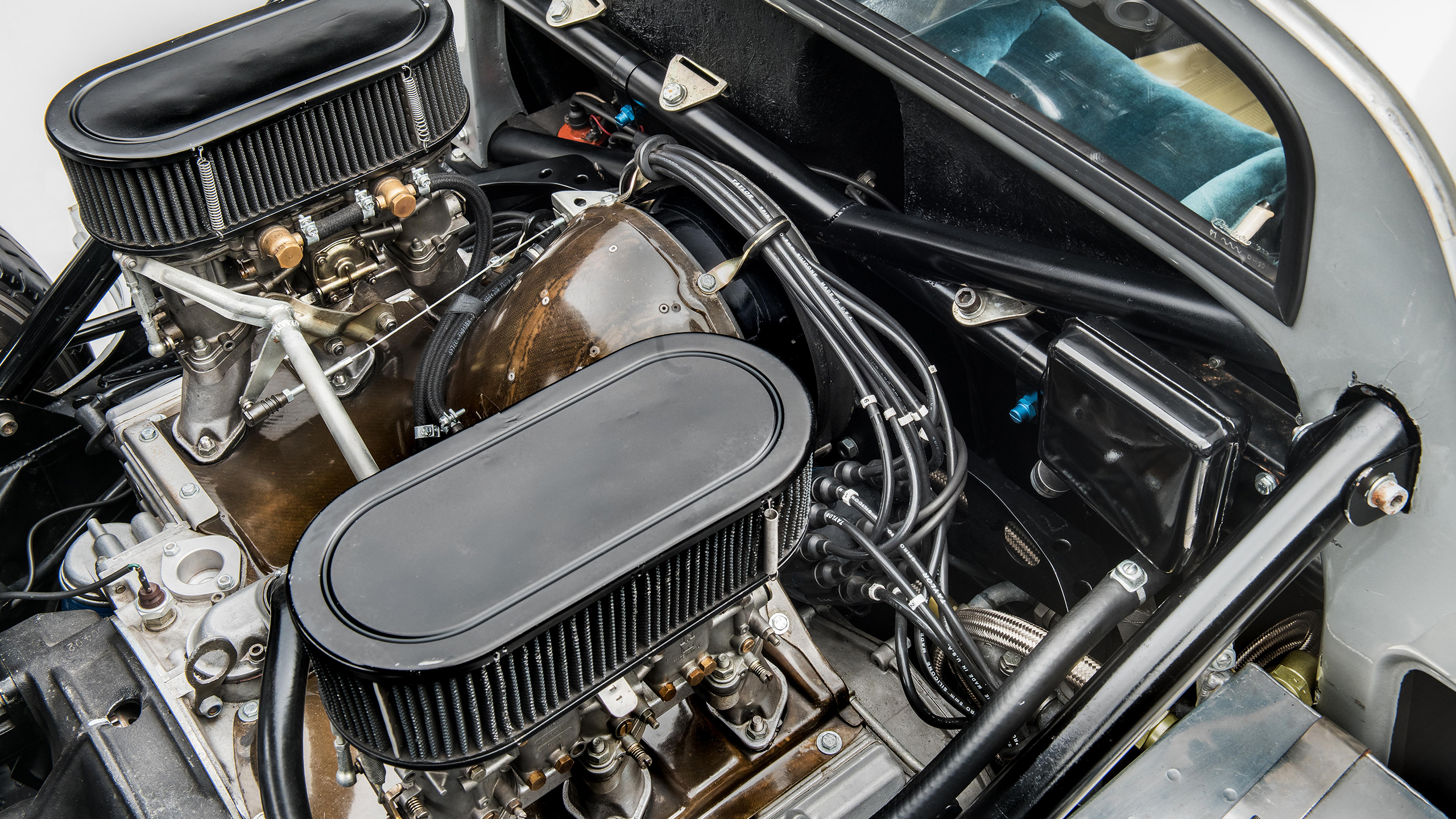 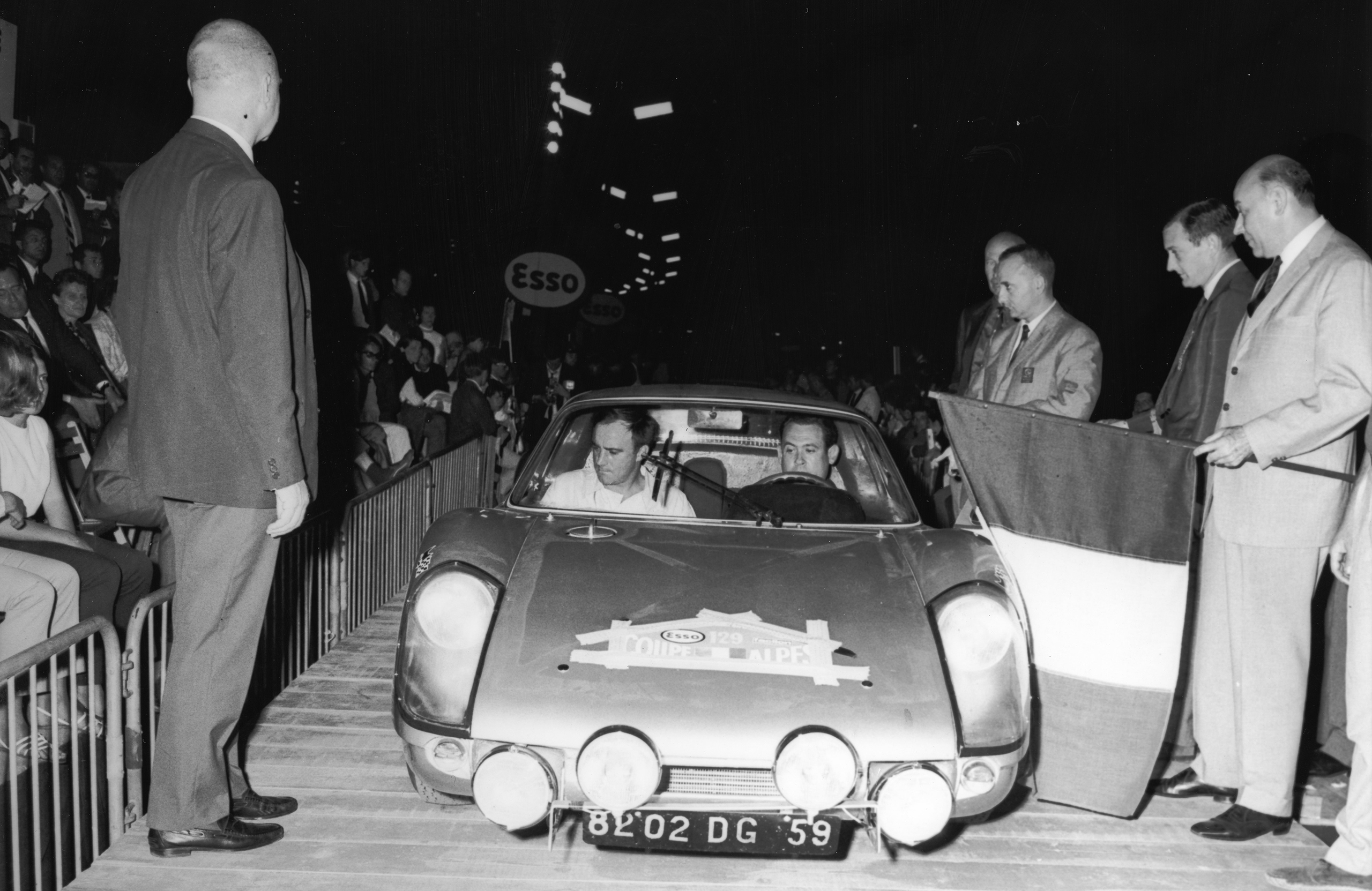 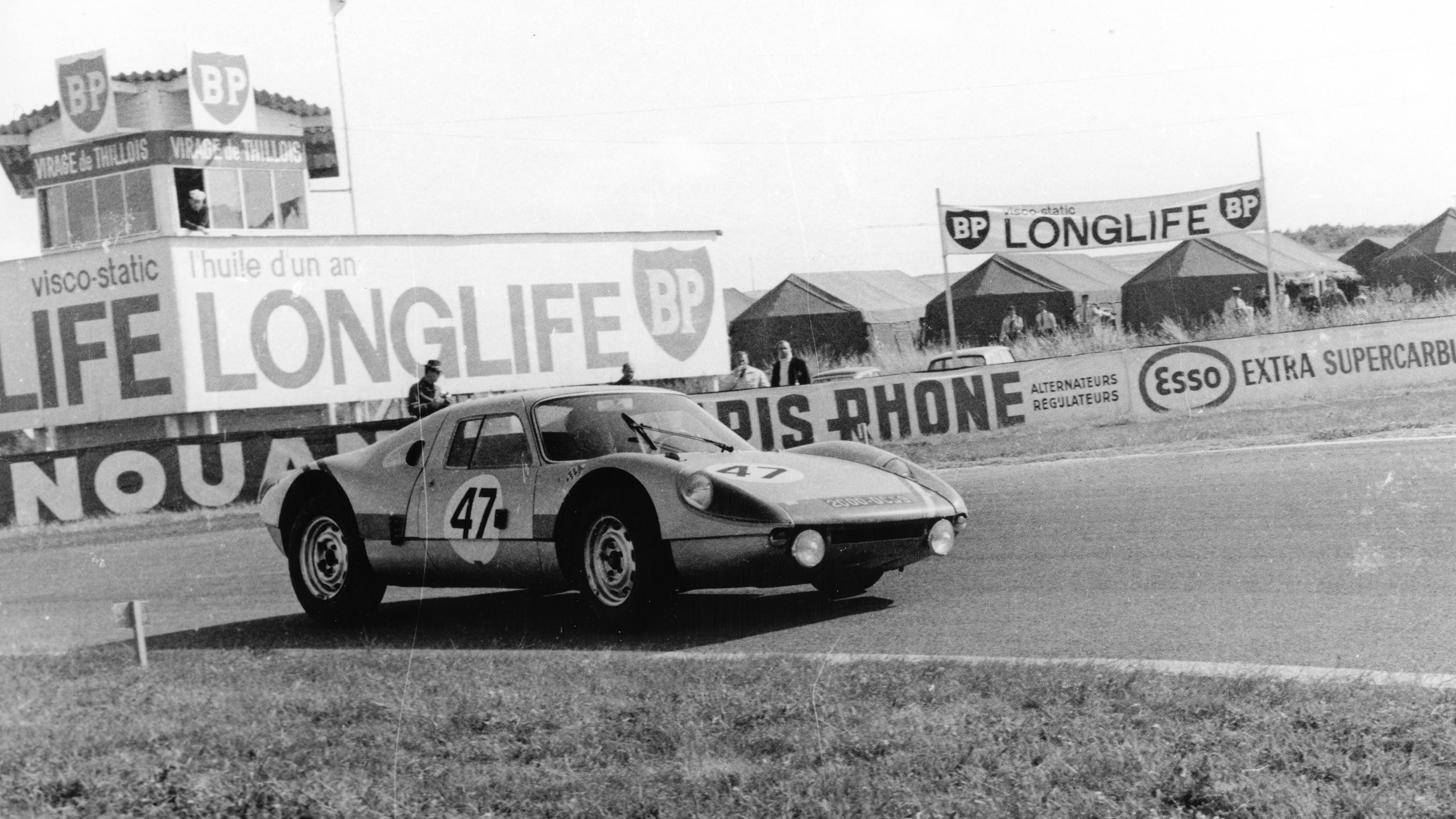 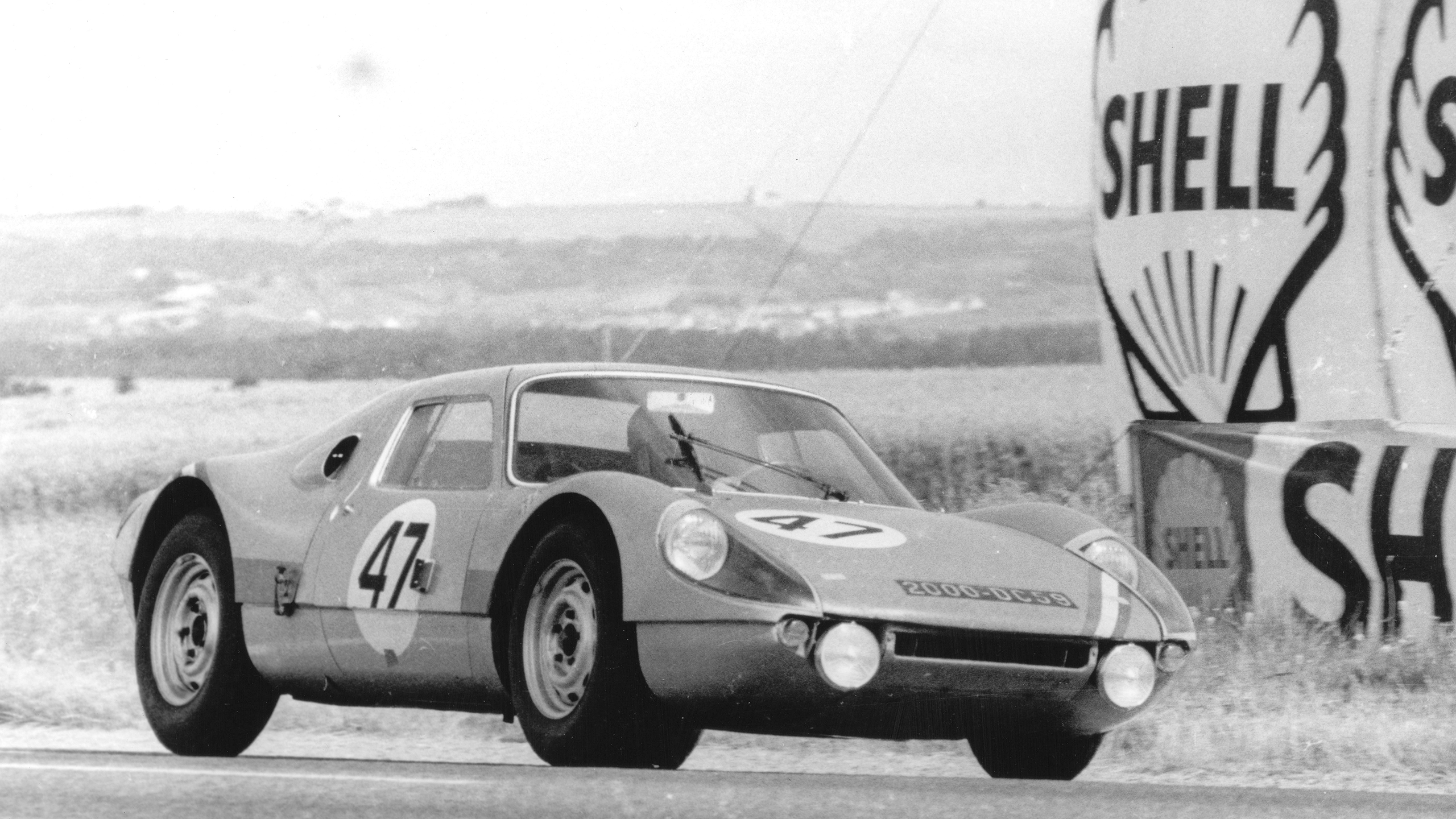 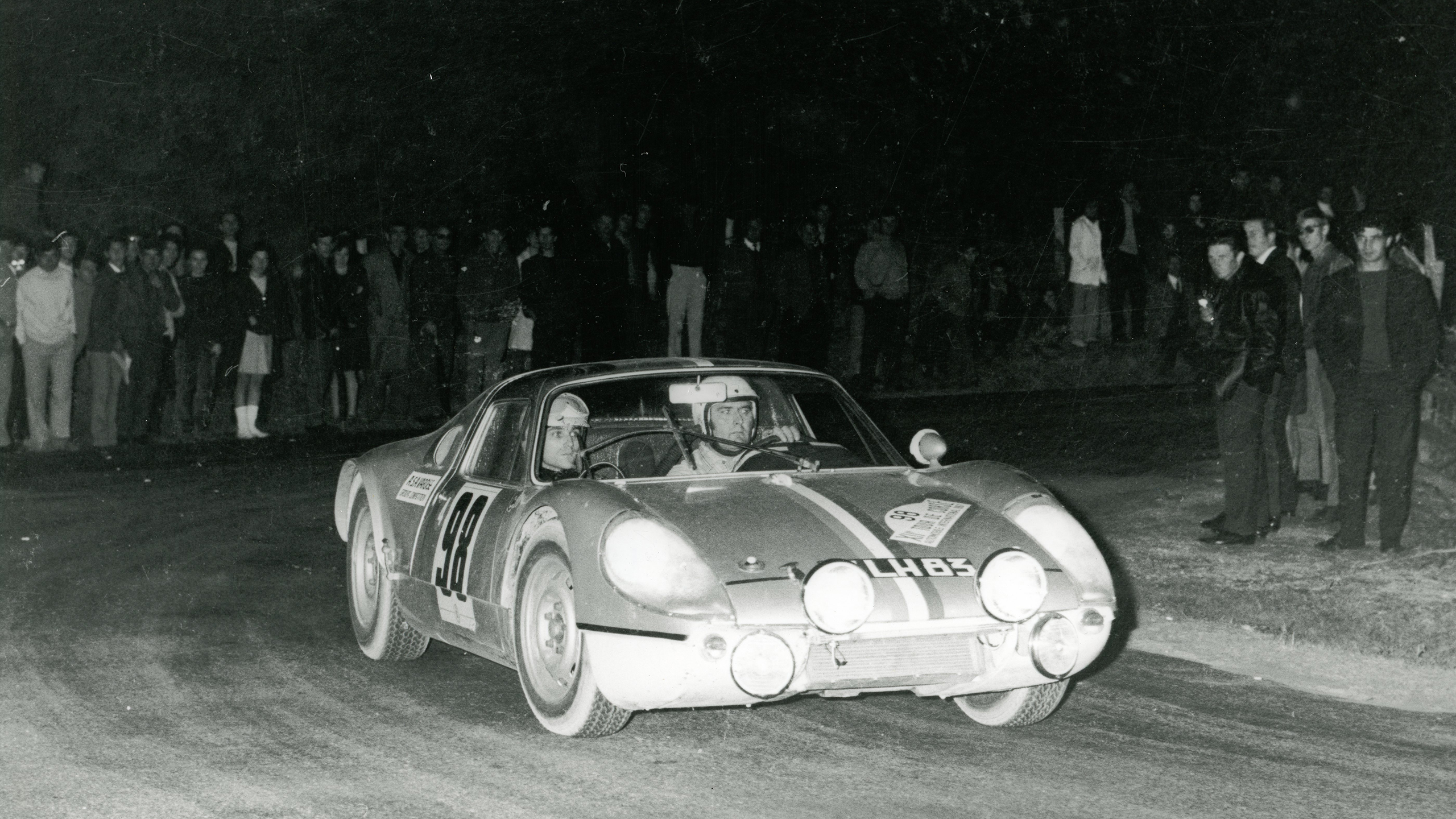 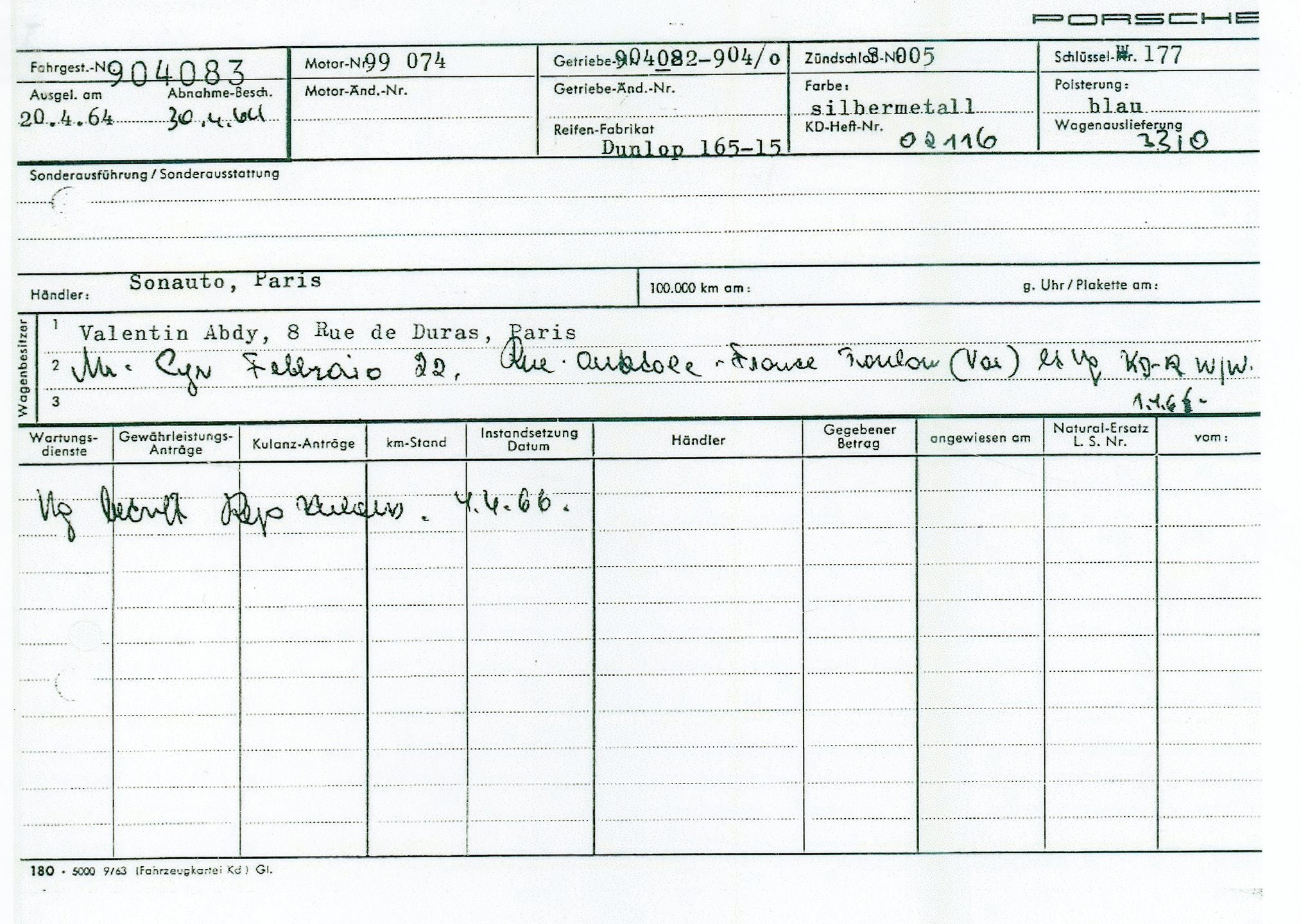 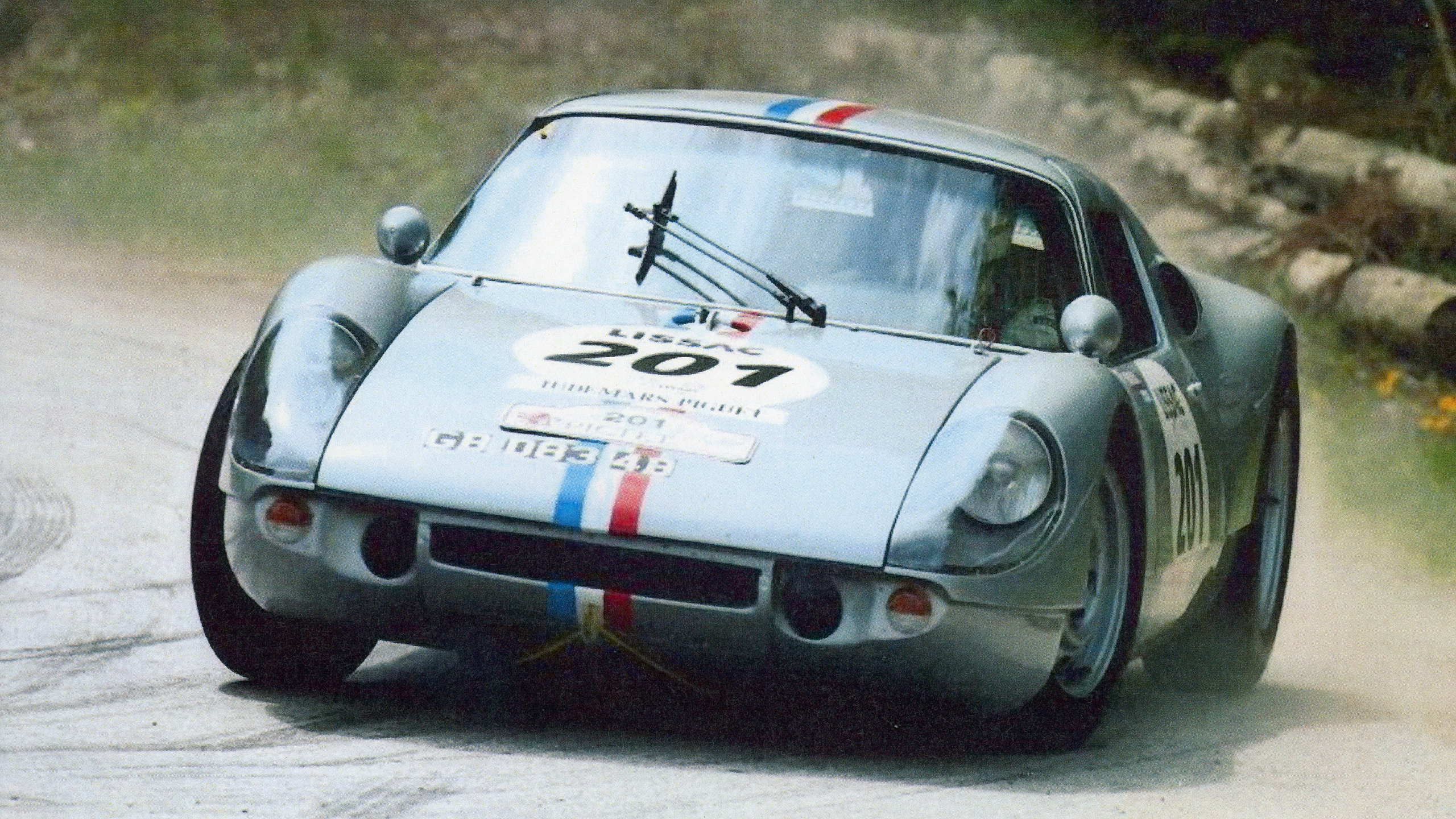 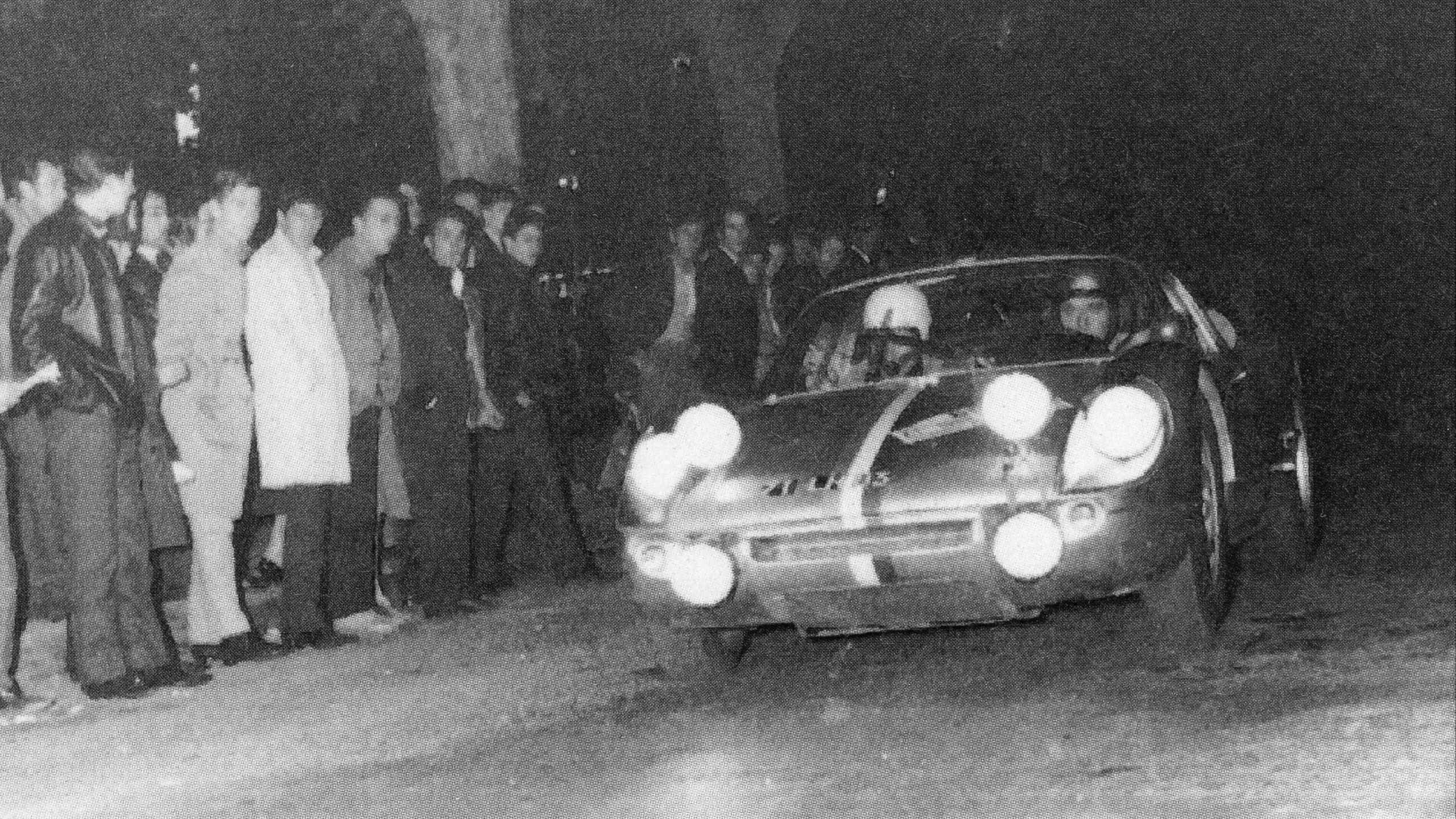 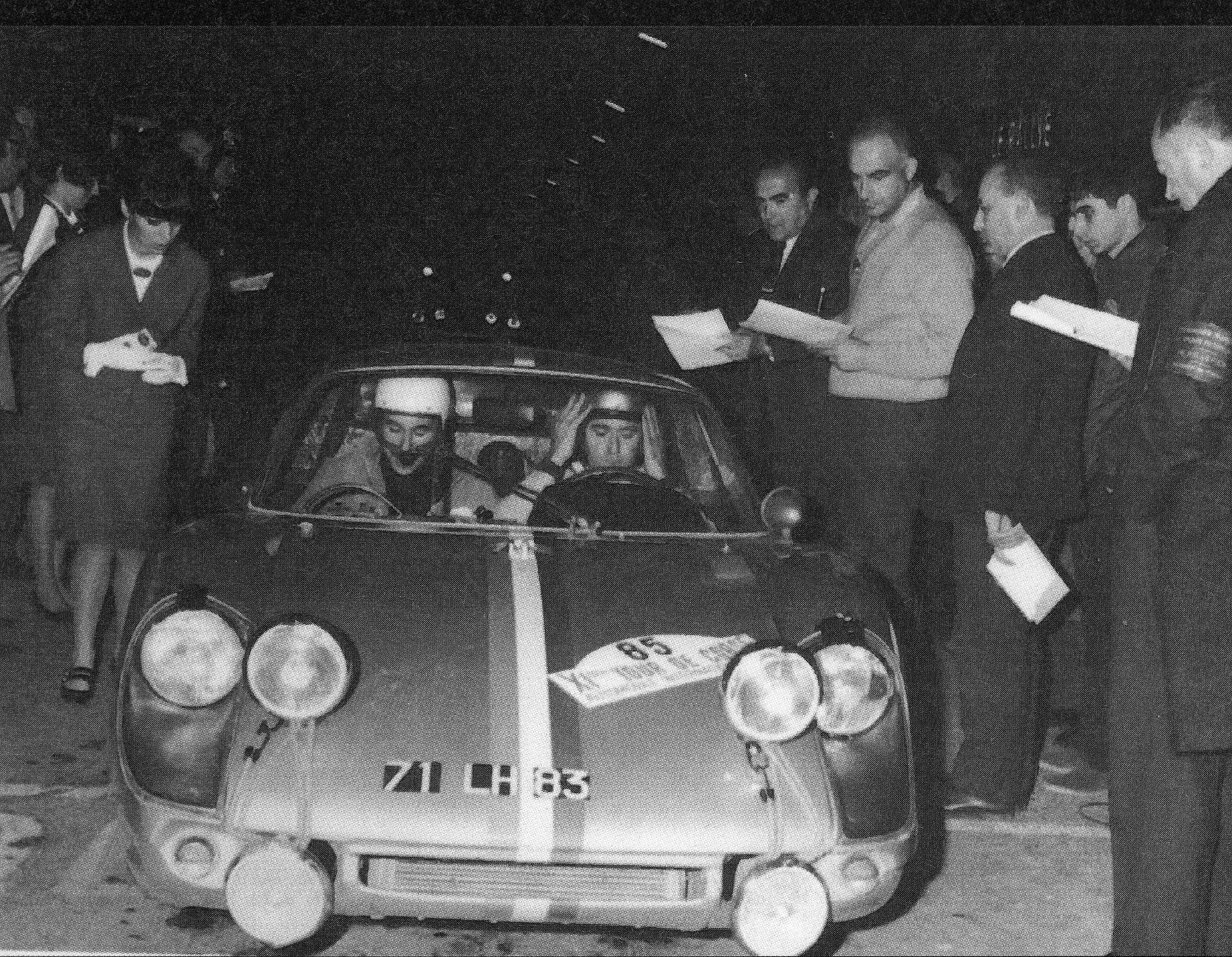 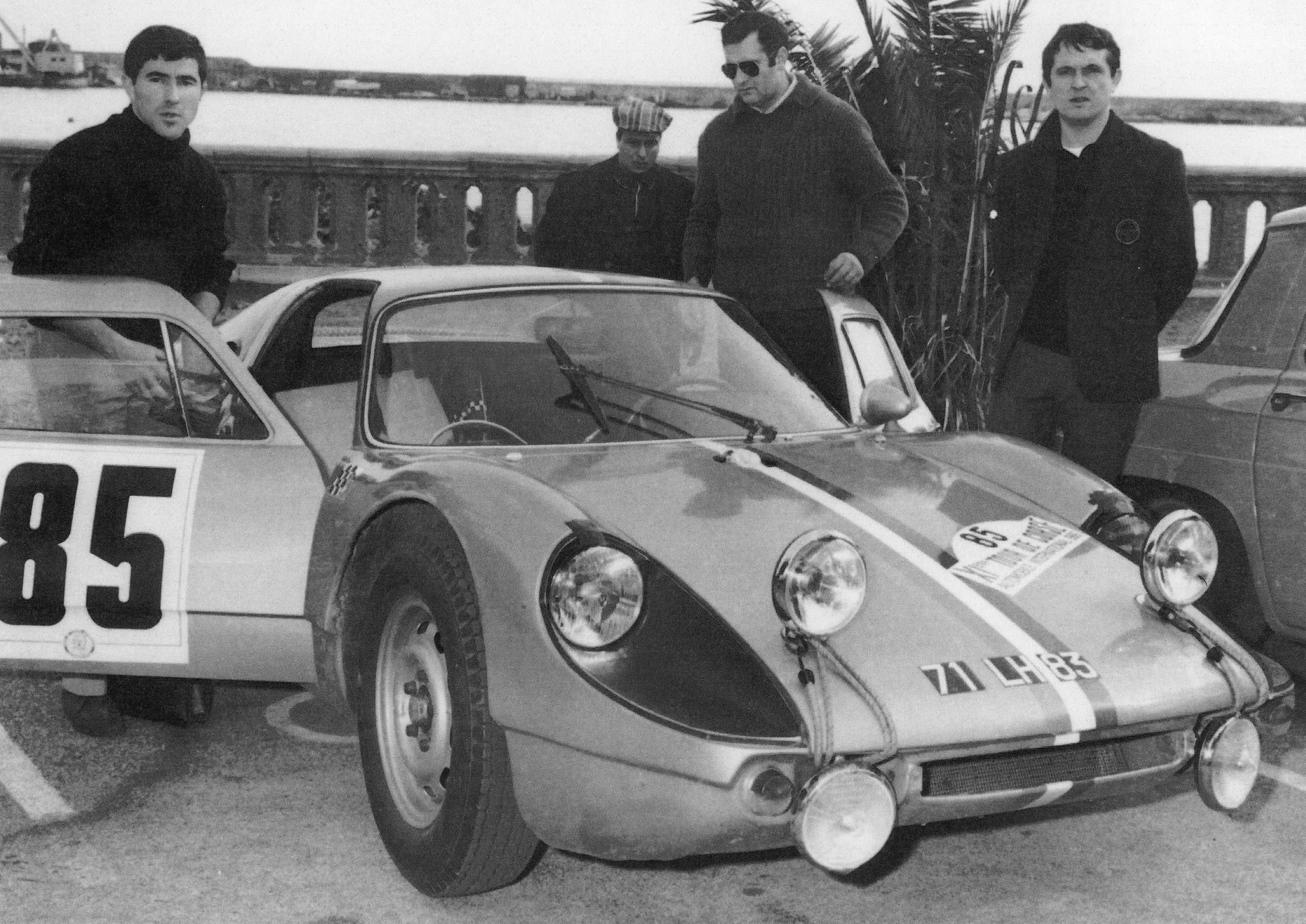 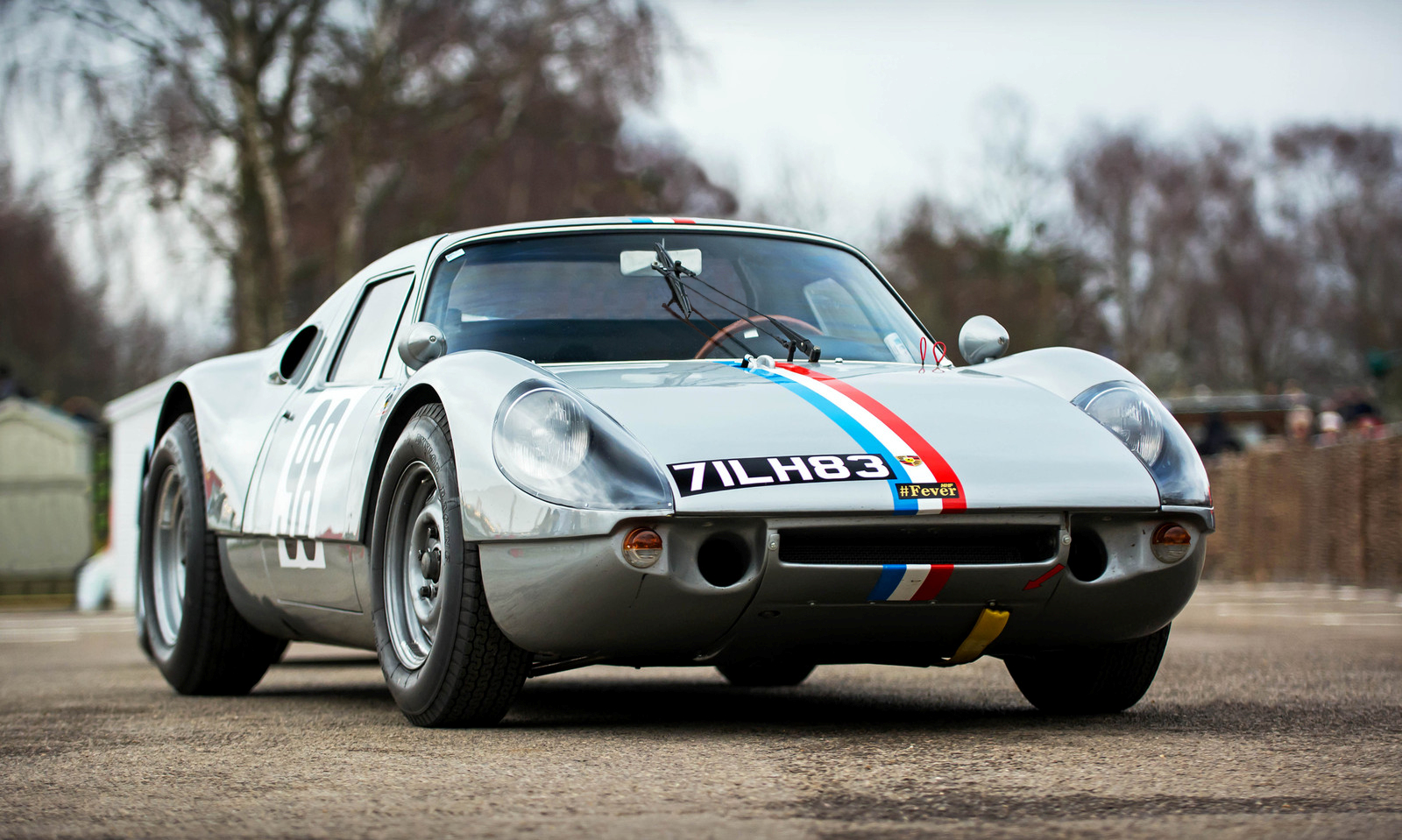 The design of the Type 904, marketed as the Carrera GTS, was quite a step for Porsche’s sports racing cars. The gradual metamorphosis from 356 to 550 to 718 jumped to the 904 which benefitted from the knowledge gained with Porsche’s foray into Grand Prix racing with the Type 804. Utilising an all new steel box frame chassis to which a glass fibre body was bonded, the suspension was now by “A“arms and coils front and rear. It was designed to use the new 6 cylinder Type 901 engine but this was not race ready when construction got underway so the Fuhrmann Type 587 4 cam from the previous sports cars was installed initially.
To meet the GT racing regulations of the time a minimum of 100 cars needed to be built before homologation could be granted and to meet this figure Porsche subcontracted the manufacture and fitting of the glass fibre body to aircraft manufacturer Heinkel. This design and construction method also kept the costs down and made repairs easier and cheaper which was necessary as Porsche would need to sell the majority of the 100 odd 904s to private customers. There were also the not inconsiderable benefits of lighter weight and better aerodynamics.
The 904 first appeared on the International scene running as a prototype at the Sebring 12 Hours in March1964, where the Briggs Cunningham car, driven by Briggs himself and Lake Underwood won the up to 3 litre prototype class.
In April, with the 904 now homologated as a GT, Colin Davis and Antonio Pucci led a
factory Porsche 904 one-two in the gruelling 720Km Targa Florio road race in Sicily. 904s cleaned up in the 2 litre GT division for the rest of the year in the World Sports Car Championship and took excellent overall placings:

The story was much the same in 1965, 904GTS took all the 2 litre GT honours and these overall placings:

904s were routinely campaigned in races, rallies and hillclimbs during the 1960s, proving their versatility and adaptability – just as Porsche had intended.

Paris Porsche distributor Sonauto sold #083 to Valentine Abdy in April 1964, it then went to Claude Barbier in March 1965 and in early 1966 to Cyr Febbraio. Both Barbier and Febbraio competed in many notable events between ’65 and ‘68 including;

Early in Barbier’s tenure #083 was returned to the Porsche Factory for repair where, as was often the case in the middle of the race season, it was fitted with a new chassis and body unit off the production line as the quickest and most efficient way to get the car back on track. The original engine, gearbox and running gear were transferred to the new chassis by Porsche as well as the chassis number so retaining its identity.
This turned out to be advantageous for Barbier as by the time# 083 was returned to the factory Porsche had upgraded the design of the chassis/body unit comprising: stronger shell with a reinforced chassis, central fuel filler, a Kamm tail, wind up windows and “short doors”. Of all the 100 plus 904s built #083 was one of only ten that received this superior upgrade, commonly referred to as “Series 2”, in period.

Porsche specialist Manfred Freisinger bought ##083 in 1971 it remained in Germany for 35 years, first with Franz Bubetz, and then Jürgen Schemel and it appears to have been used sparingly. In the late-1990s Schemel had the car sympathetically restored by Bergermann, who was also a fibreglass specialist and was advised by some of the world’s greatest 904experts.
Restorations to important cars were by then having work carried out sensitively and correctly, unlike some earlier poor restorations carried out in the 70’s and 80’s when the cars were worth less, #083 remained in very original and unmolested condition.
#083 was bought by James Lindsay in 2007 and brought to the UK for use in historic events including the Goodwood Revival and a successful outing in the Tour Auto. In 2010 it was sold to Danny McKenna in Los Angeles and then to Texan Randall Johnson in 2012. Whilst in the USA considerable work was done to maintain its excellent and original condition, including attention to the brakes, gearbox, suspension, and some cosmetic improvements. As when it was in Germany it appears chassis 083 was not used in competition while in the USA.

RETURN TO THE UK:

DK Engineering returned #083 to the UK in 2014, the purchaser wanted the best 904 available and it had to be matching numbers, 083 is one of only very few examples that retains both matching-numbers engine and gearbox. An extensive report was compiled for the purchaser by a renowned Porsche expert who reconfirmed the car’s provenance comparing his findings with those of 2009 when he had inspected it ahead of its move to the United States.
His summary states:
904-083 is an excellent, well cared for car with a very good and fully known history. Given its current state of preparedness it is without doubt one of the best 904’s extant.”

The car has subsequently been fitted with a six-cylinder engine as originally planned by Porsche for the 904 and as installed in some of the later chassis in period. This ensured greater versatility for races and rallies or even for road use. To preserve the original matching-numbers status of the car, the original four-cylinder unit still accompanies the car in a display stand.

Porsche 904 chassis #083 is one of the finest examples of probably the best mid-1960s GT car that remains equally at home on race track, rally stage or road. Its Series 2 specification, matching-numbers and continuous history authenticity is complemented by an extensive file of period images, historical documentation, invoices, race history and details of its previous HTP (Historic Technical Passport) papers for competition.
The car is ready to be campaigned in all Blue Riband historic motorsport events around the world.