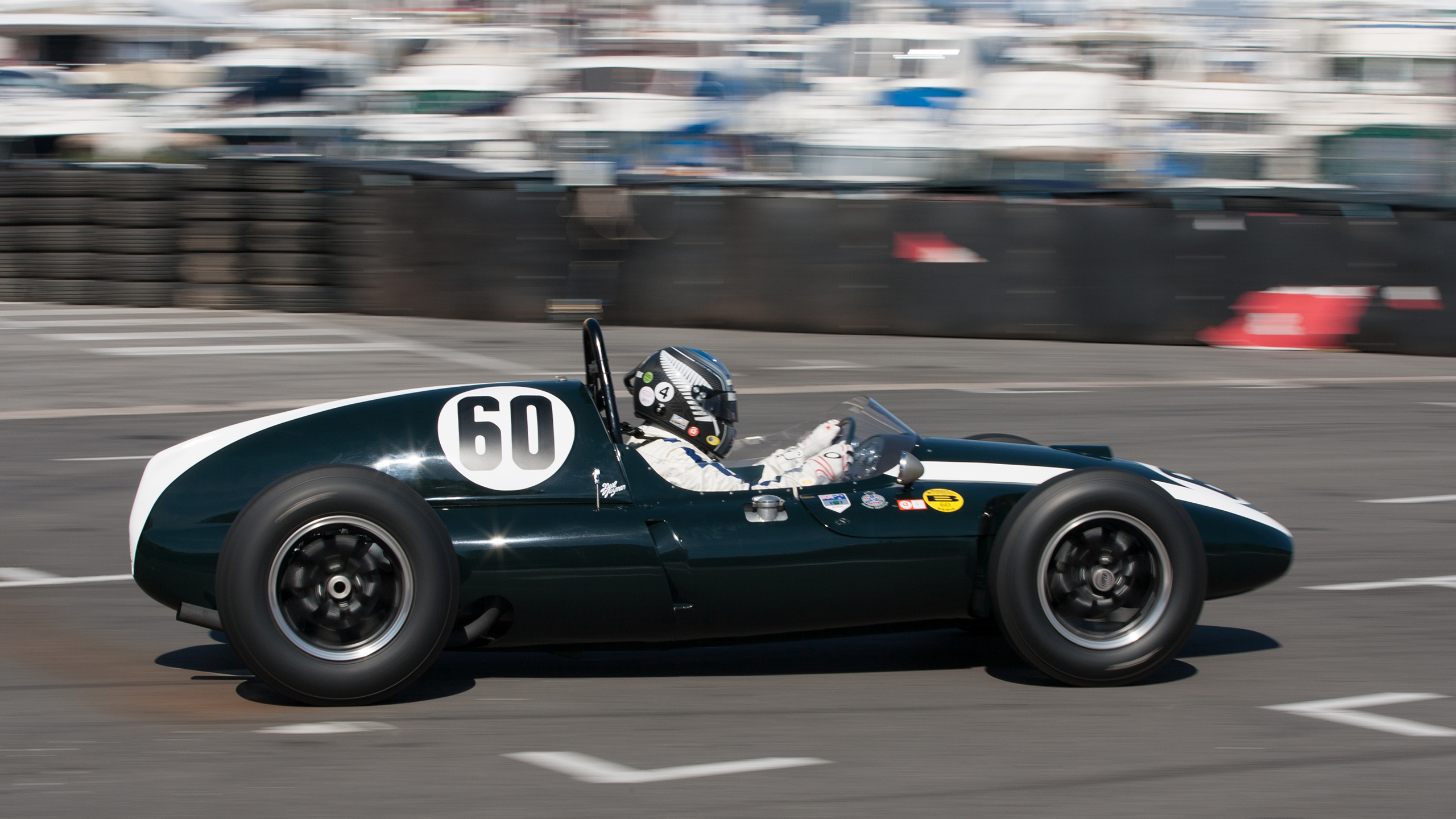 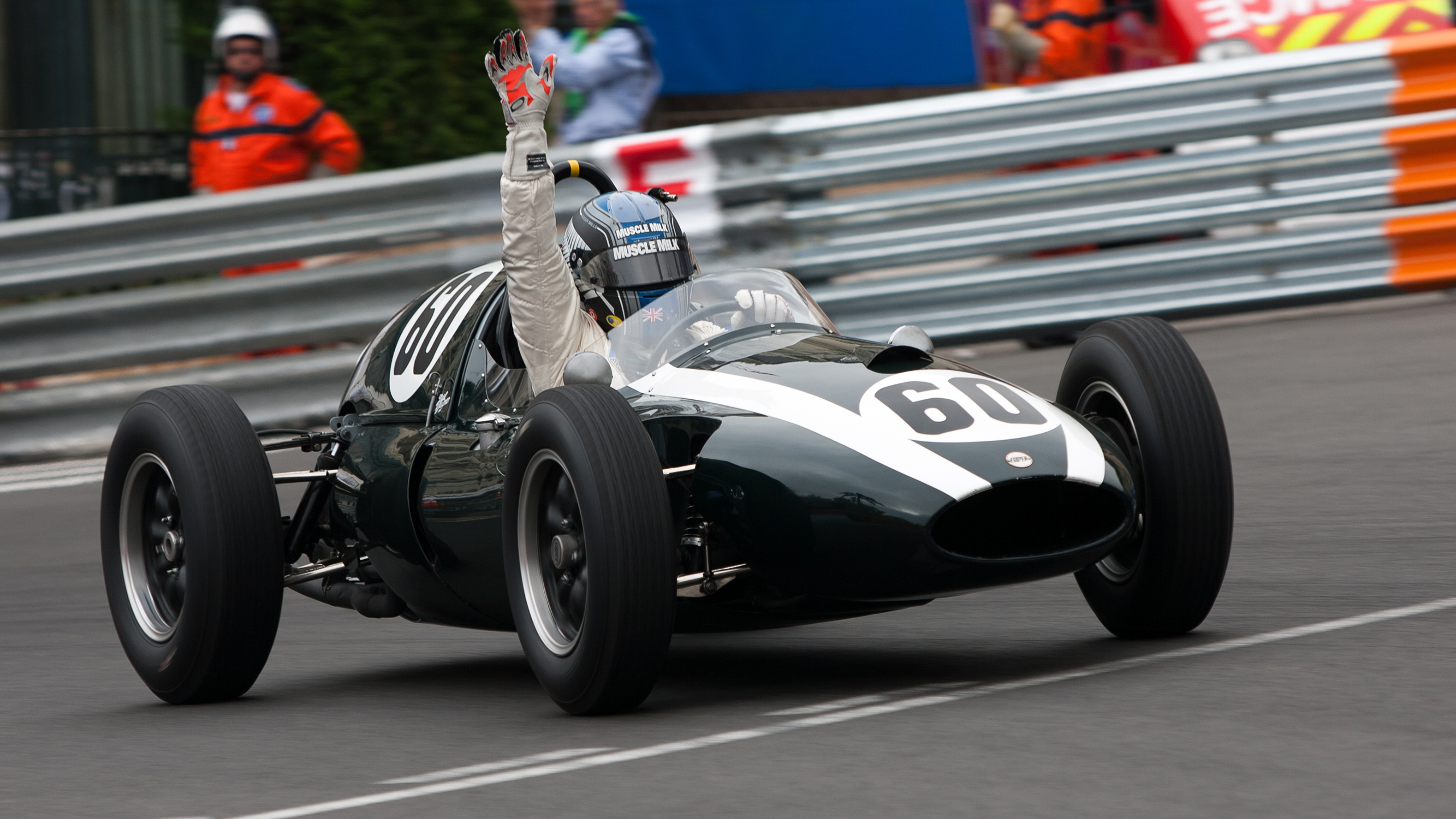 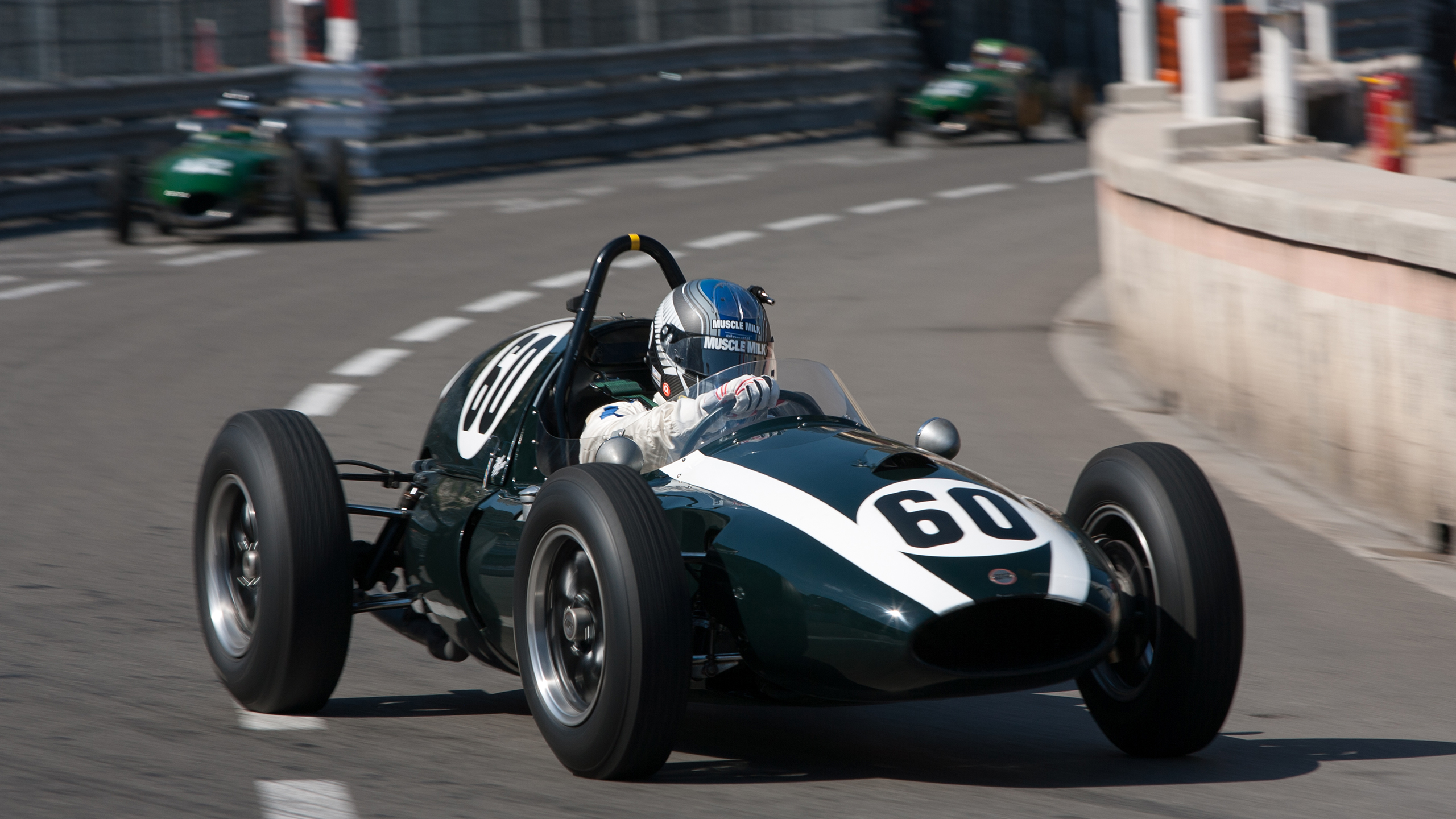 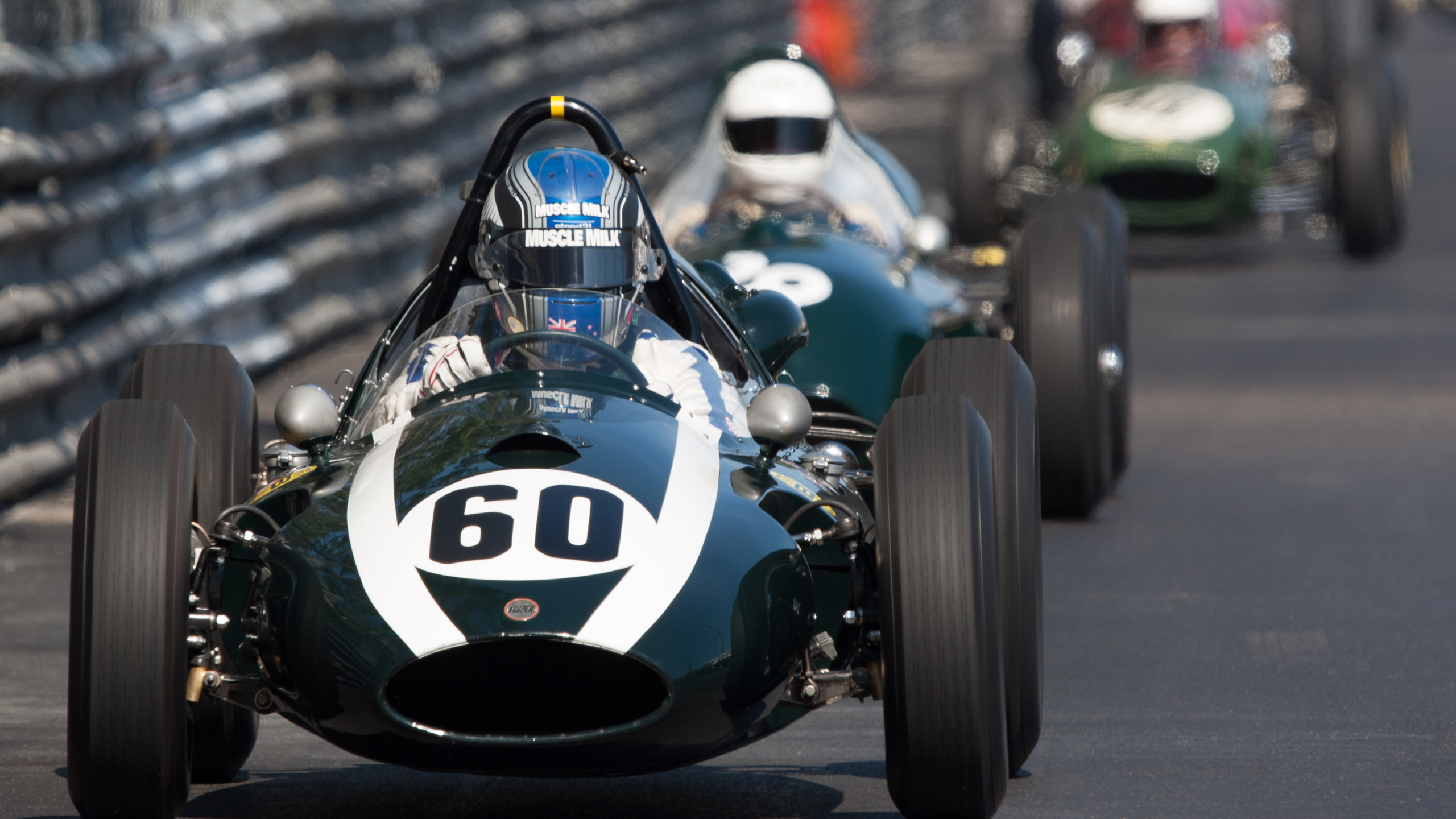 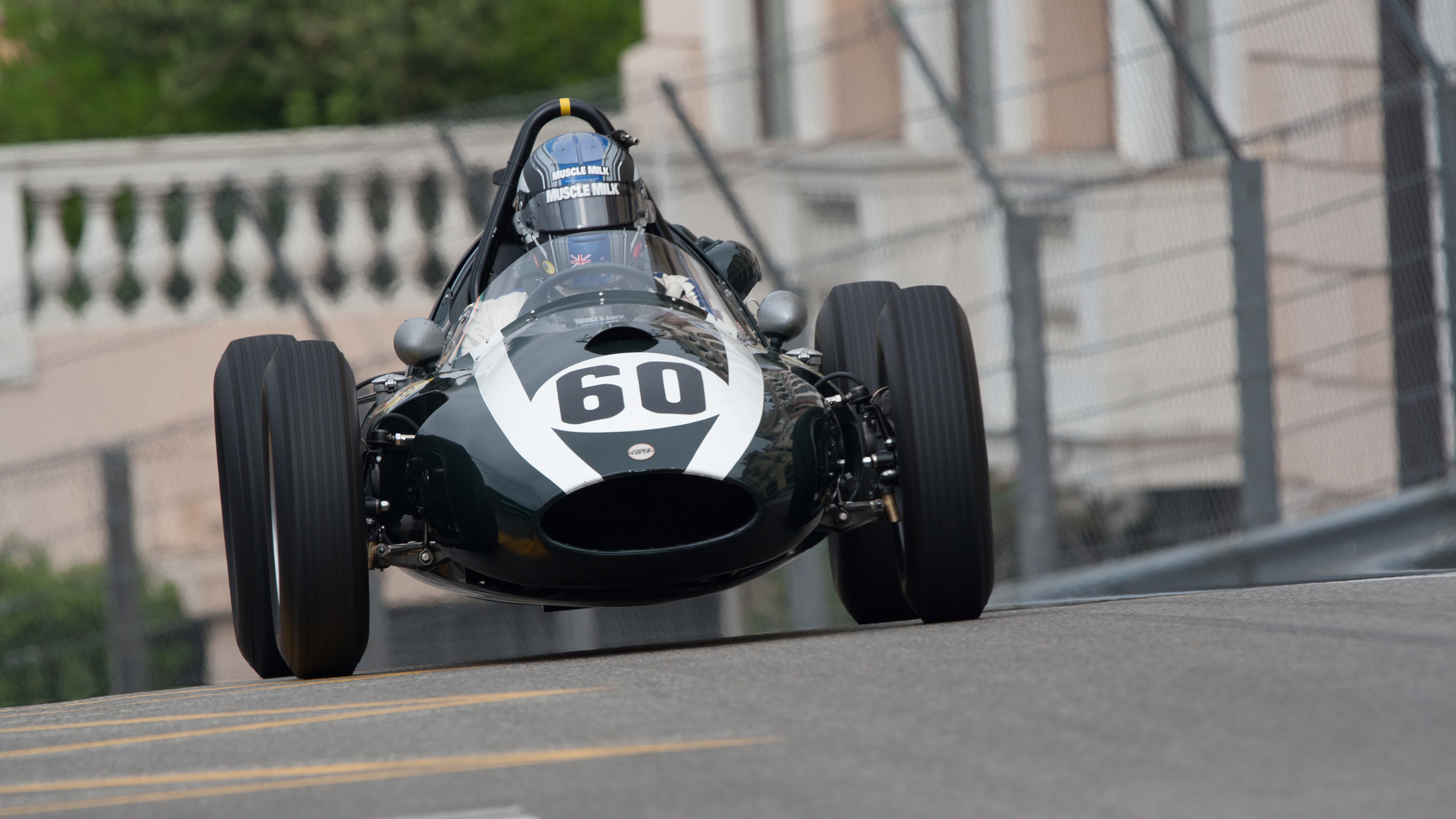 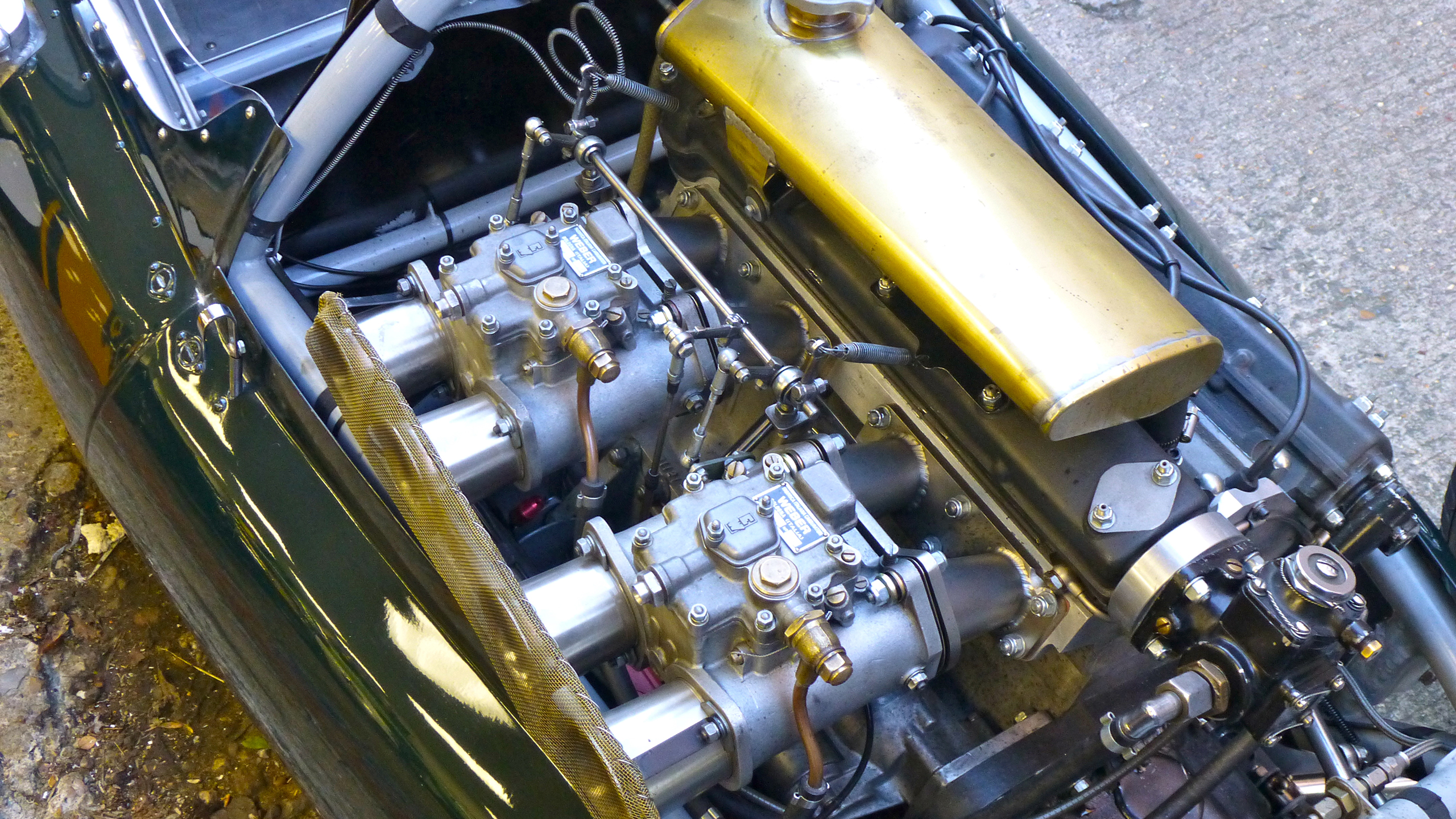 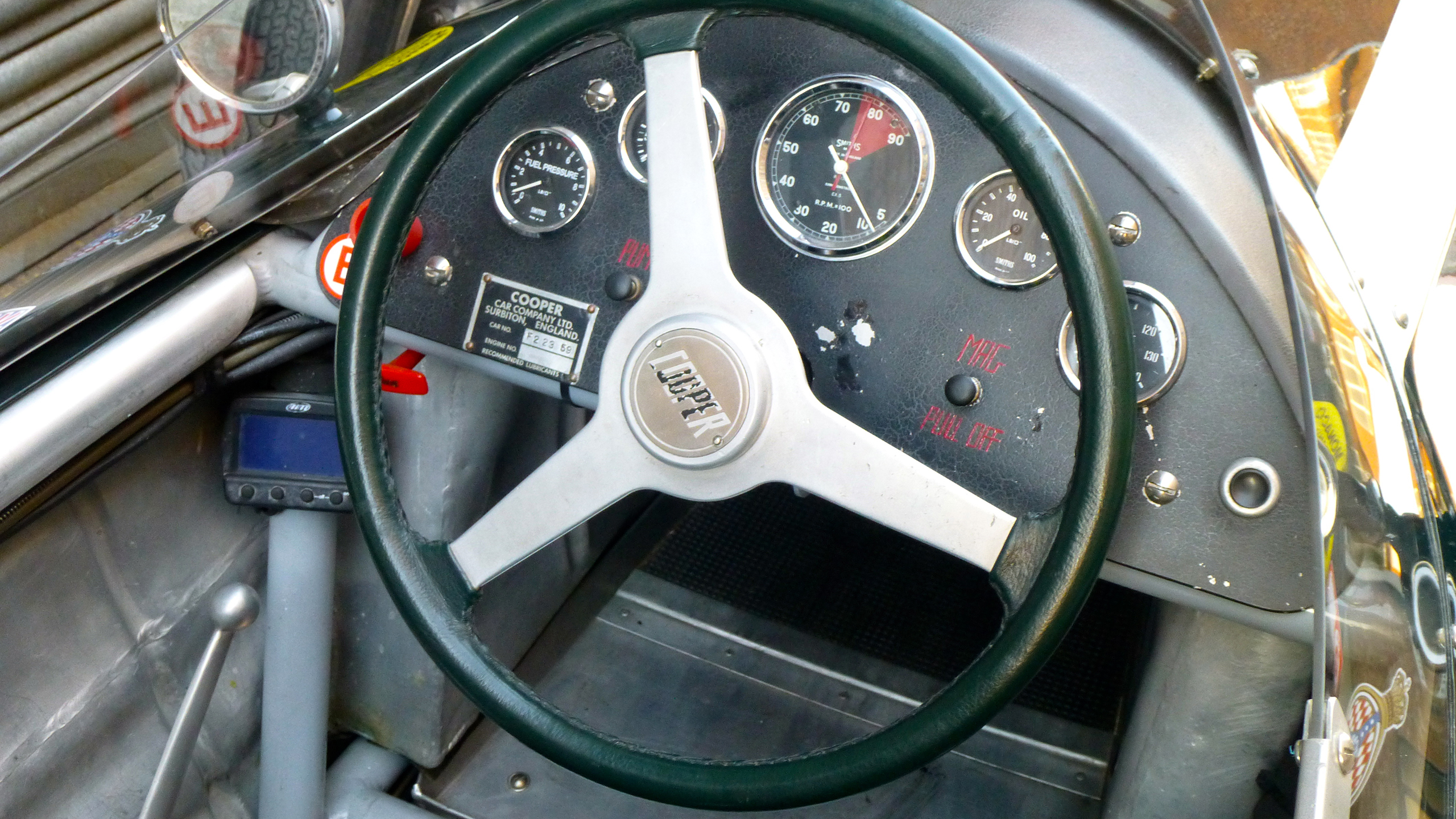 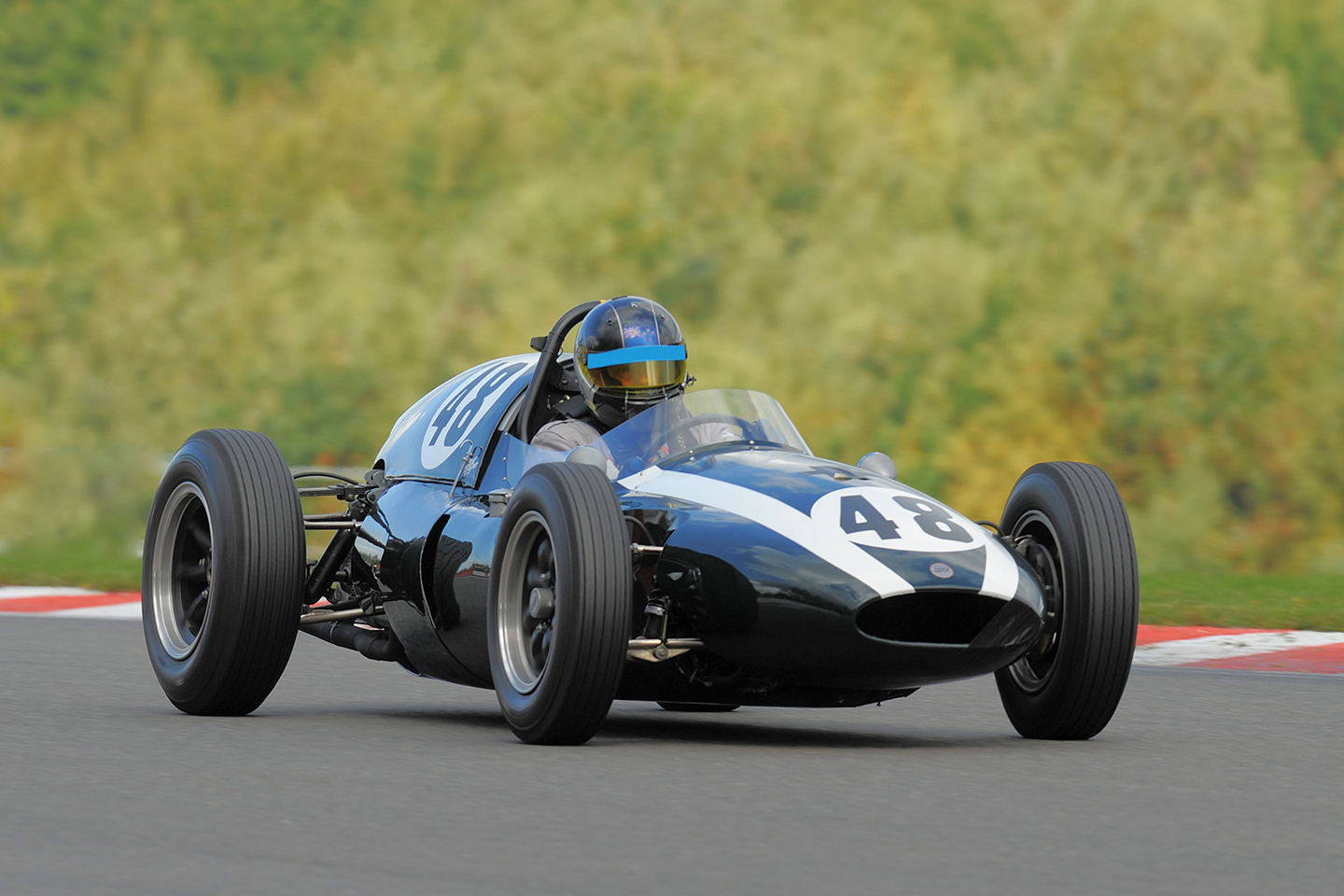 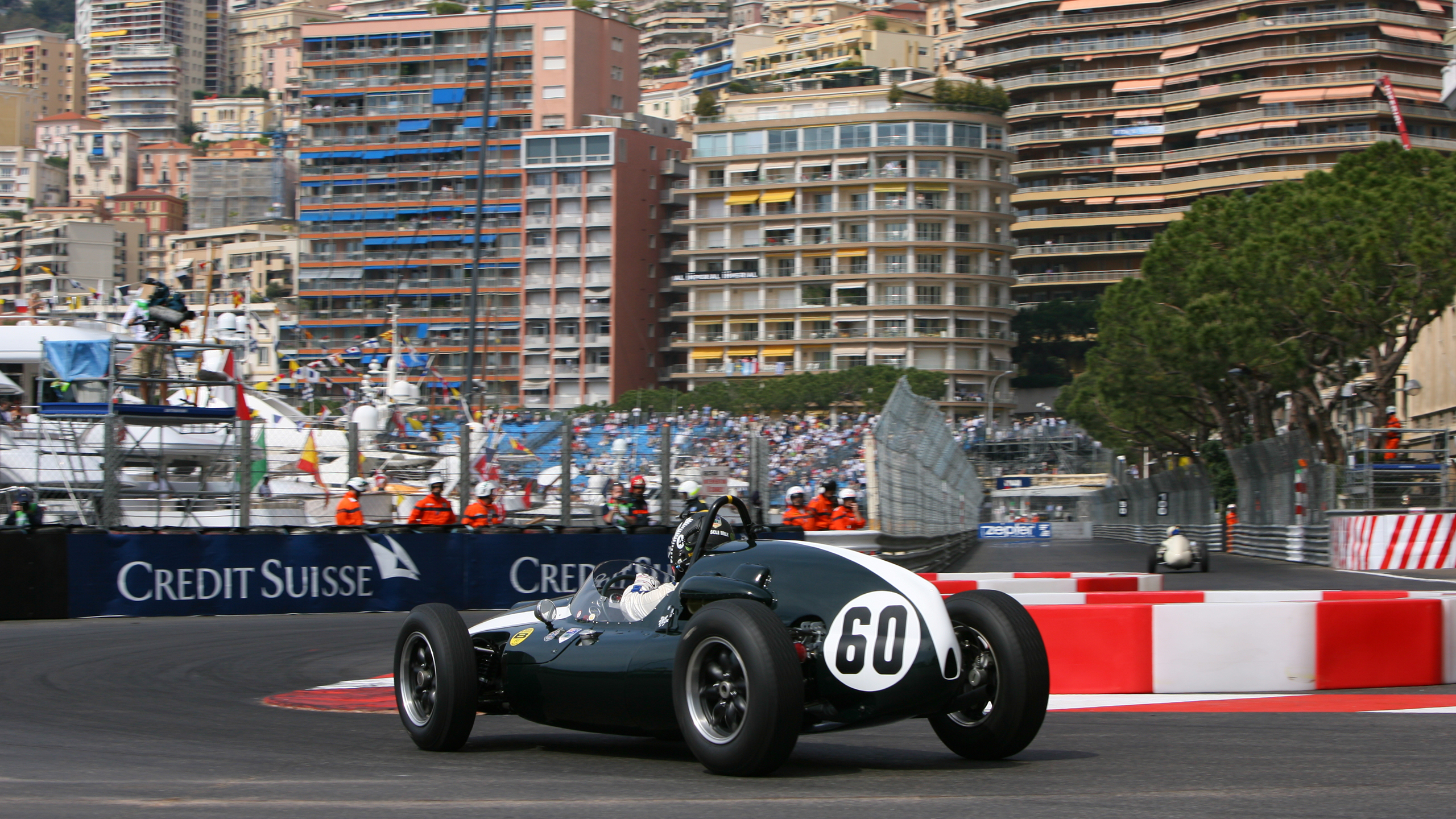 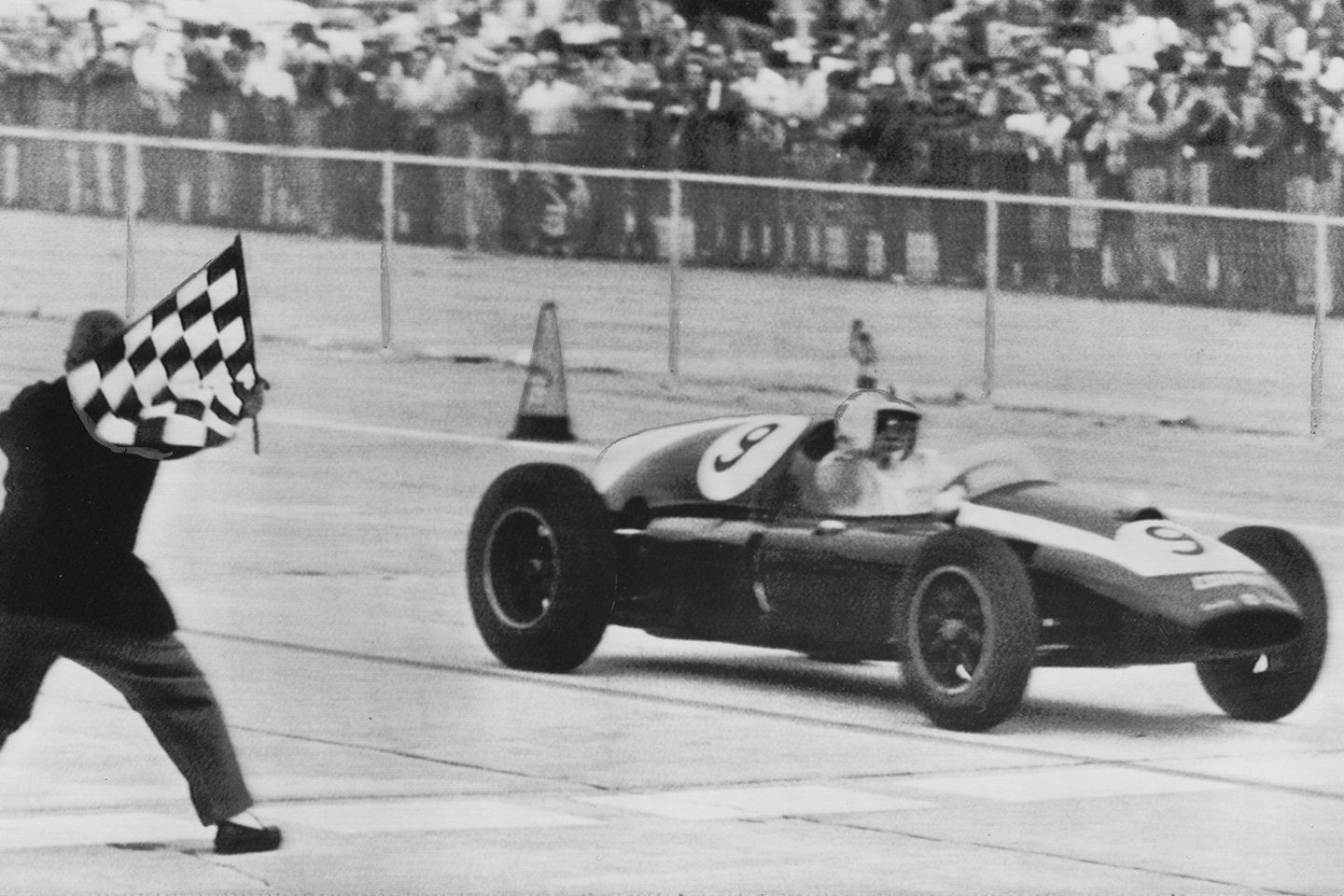 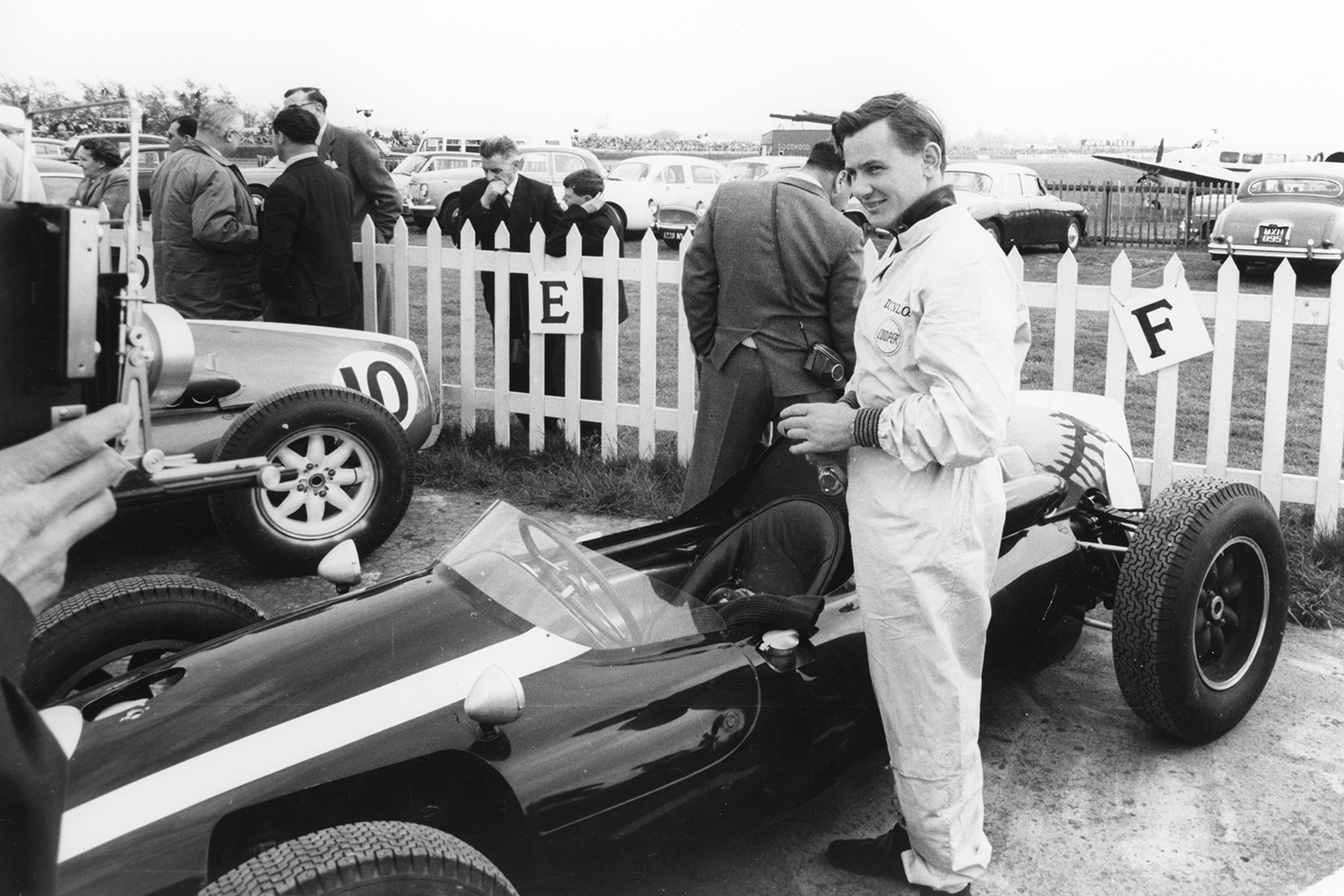 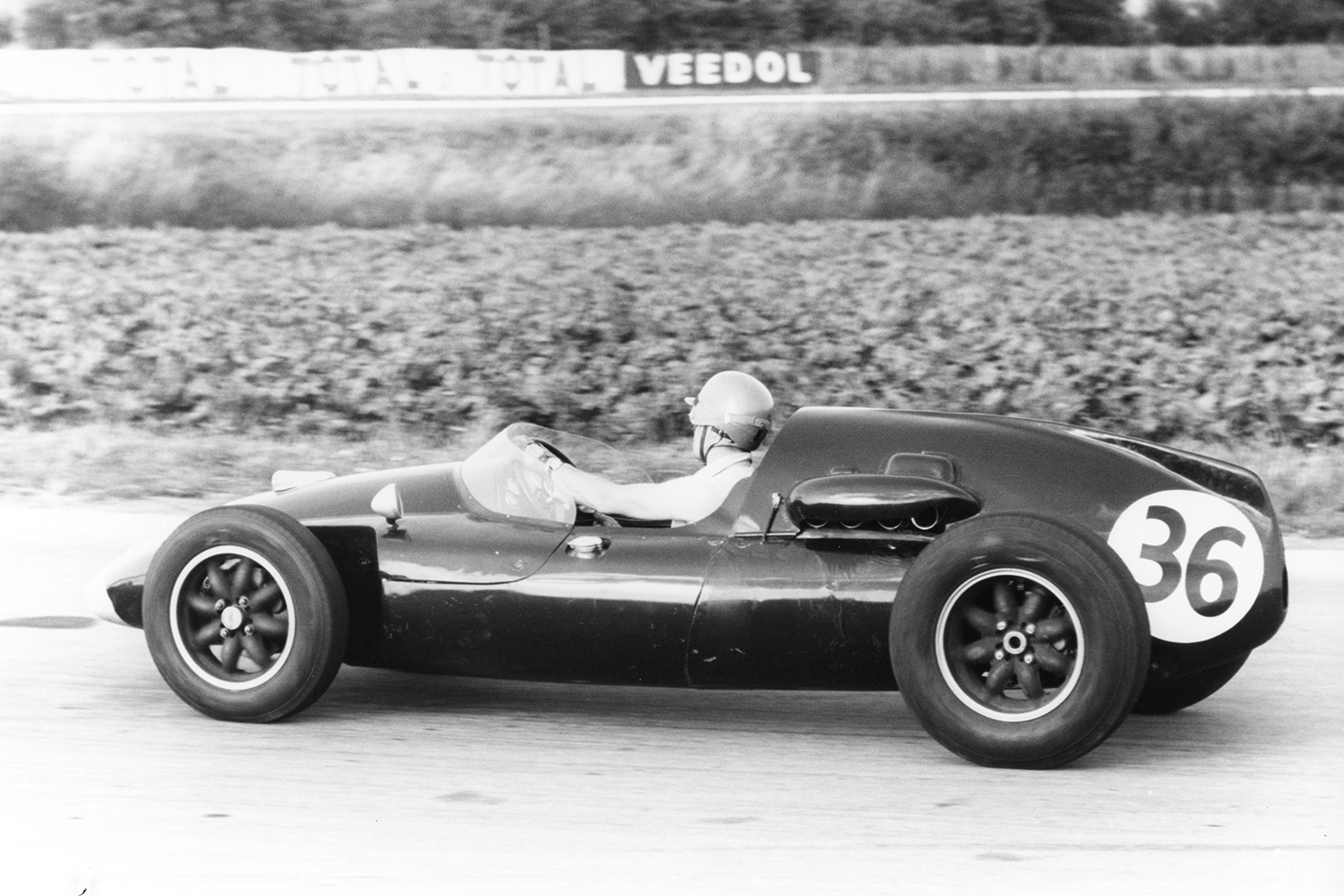 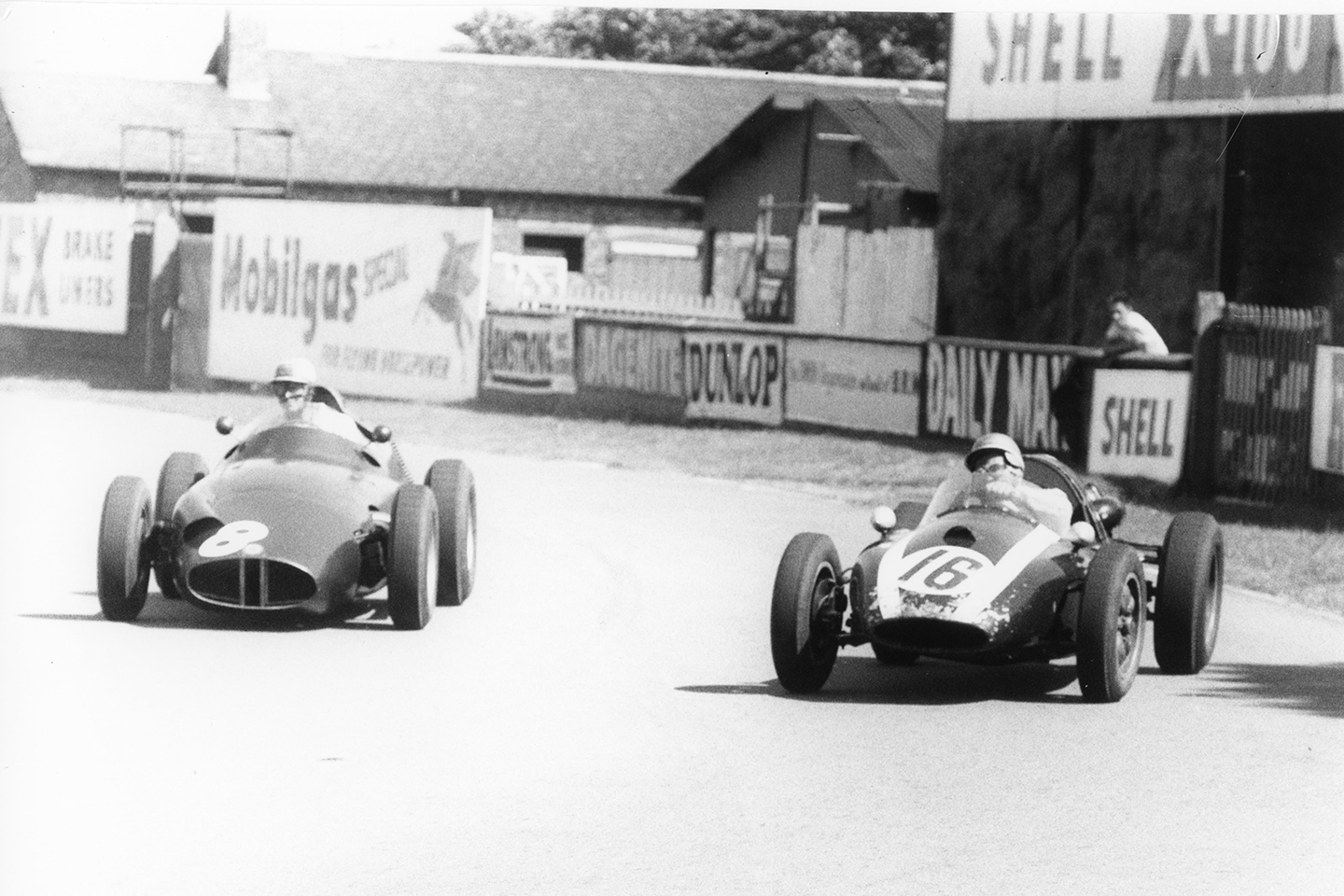 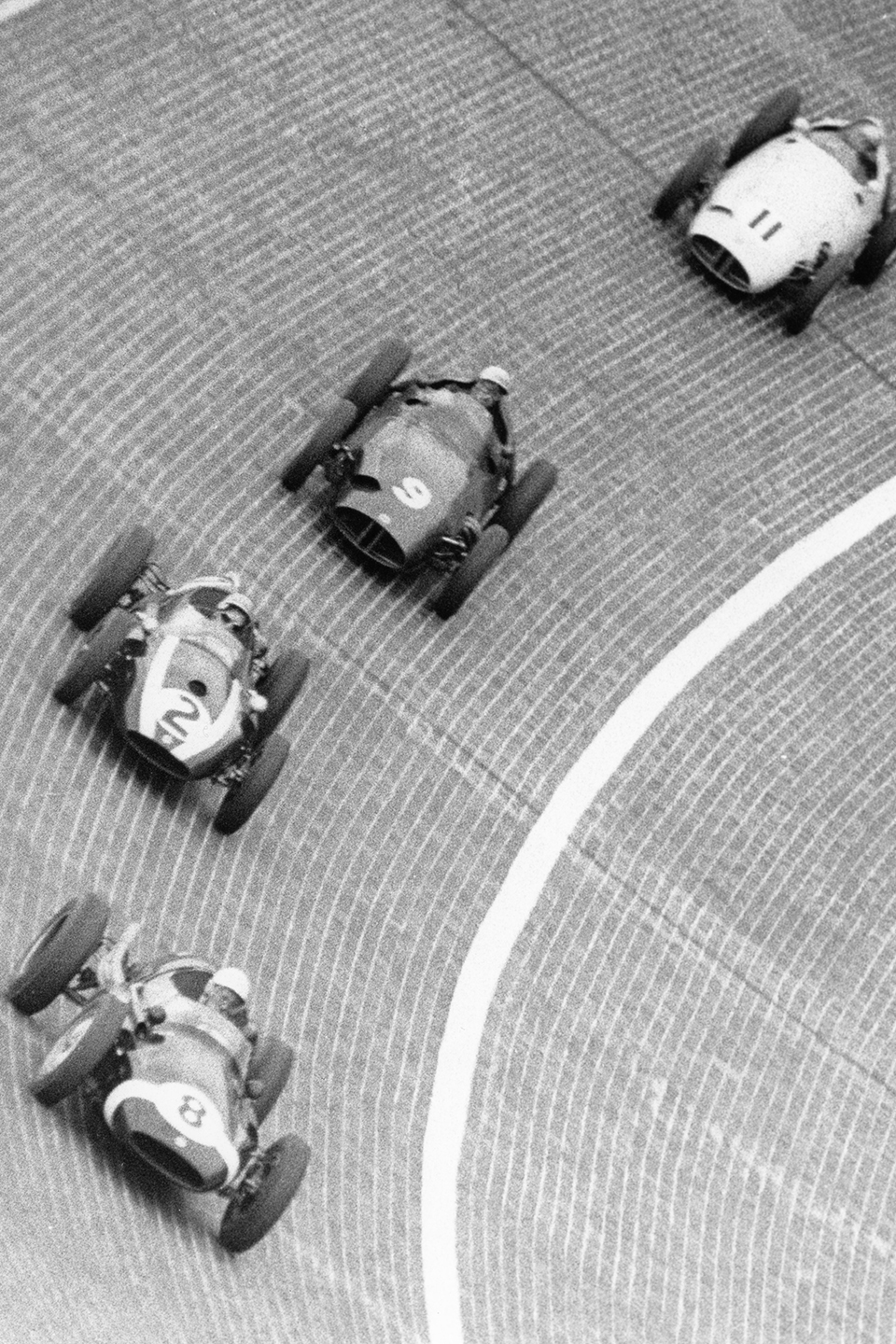 F2-23-59 started life in 1959 as a works car for the Cooper Grand Prix team when they won the World Constructors Championship and lead driver Jack Brabham became the World Drivers Champion. F2-23-59 was fitted with a 4 cylinder Coventry-Climax FPF and raced by Bruce McLaren throughout the year finishing 3rd in the British GP at Silverstone and then taking his maiden Grand Prix victory in the US Grand Prix at Sebring.
Originally fitted with a 2.2 litre Coventry Climax FPF engine, even in period 2.5 litre units were at a premium, McLaren was finally issued with a full-house 2.5 litre FPF for the French GP and in the next Grand Prix, the British at Aintree, used it to good effect to finish 3rd and set equal fastest lap with Stirling Moss. McLaren had originally had a taste of 2.5 litre FPF power in practice at Monaco where he described the difference between the 2.2 and the 2.5 as “Startling”.

And then in a fitting end to the 1959 GP season in the final race, the US Grand Prix at Sebring, Bruce McLaren won his first GP in F2-26-59’s last works outing.

For 1960 F2-23-59 was sold to Fred Tuck & Horace Gould. Tuck privately entered the car in numerous Grand Prix with various drivers taking the wheel including Roy Salvadori and Lucien Bianchi who scored an excellent privateer’s result of 6th at Monaco.

In 1961 the Formula 1 regulations were changed, limiting the engine size of Grand Prix cars to 1,500cc and the car was ﬁtted with a 1.5 litre Coventry Climax engine. In 1962 American Frank Dochnal bought the car and shipped it to the States where he won ﬁrst time out at Riverside Raceway after starting from the back of the grid. Dochnal used the car regularly and entered the 1963 Mexican Grand Prix but unfortunately failed to start after damaging the rear suspension in practice.

Dochnal then retired from racing selling the engine and gearbox to Richie Ginther and the car to US National racer Ed Mackey who fitted a 1,400cc Alfa Romeo engine & modified VW gearbox and campaigned the car all across the South West for several years. In 1966 he and F2-23-59 won the SCCA Southern Paciﬁc Division Formula A championship. This earned them an invitation to the American Road Race of Champions at Riverside where Mackey and the Cooper qualified second only beaten by a 3 litre V8 powered Lotus 24.

Ivan Zaremba was a spectator at Riverside and impressed with the speed of the older car bought it from Mackey and raced in Formula A throughout 1967. He acquired a potent 1,600cc Alfa engine from an Auto Delta Alfa TZ and raced F2-23-59 in Formula B throughout ‘68 & ’69 then sold the car to race mechanic Ron Fink.

Fink sold the engine and box and started to prepare the car but never finished it finally selling the rolling chassis to Steve Froines in the early 70s. Taking many years to source the correct parts Froines restored the car to her original speciﬁcation with a 2.0 litre Coventry Climax FPF engine and ERSA gearbox. F2-23-59 returned to the track in 1984 and for the next 20 years was a star of US historic races competing at 15 editions of the Monterey Historic Automobile Races, winning many of them.

After more than thirty years of ownership and shortly after installing the rare full 2.5 litre Coventry Climax FPF he sold the car to US based British historic racer Murray Smith in 2006 who continued her successful racing career in the USA.

The current owner purchased F2-23-59 in 2008 and returning F2-23-59 to the UK after nearly 50 years gave it to Neil Twyman to prepare with no expense spared. Since then it has been fettled by JRP Racing and campaigned with tremendous results in HGPCA events including wins at Portimao and the Silverstone Classic as well as important victories at the Goodwood Revival & two outright wins in the Monaco Historique.

The 2.5 litre Coventry-Climax FPF engine has recently had a complete David Whitehurst rebuild and raced twice only since, at the Silverstone Classic and Goodwood.
F2-23-59 survives from it’s 60year competition career with an unusually high percentage of original components from 1959. As well as the chassis and bodywork, still showing weld to repair the cut necessitated to fit the Alfa engine, it still has the original fuel tanks, seat and gauges.
F2-23-59 has current HTP papers valid to 2026 and is referred to and documented in Doug Nye’s Cooper Cars book.

With the car there is a large history file containing the detailed history, American historic racing log-books, period copies of Autosport & Motorsport with race reports of F2-23-59. Many racing photographs of F2-23-59 from 1959 to the present day, invoices from Neil Twyman, Crosthwaite & Gardner and JRP Racing and a 6 page article from Classic Cars magazine.