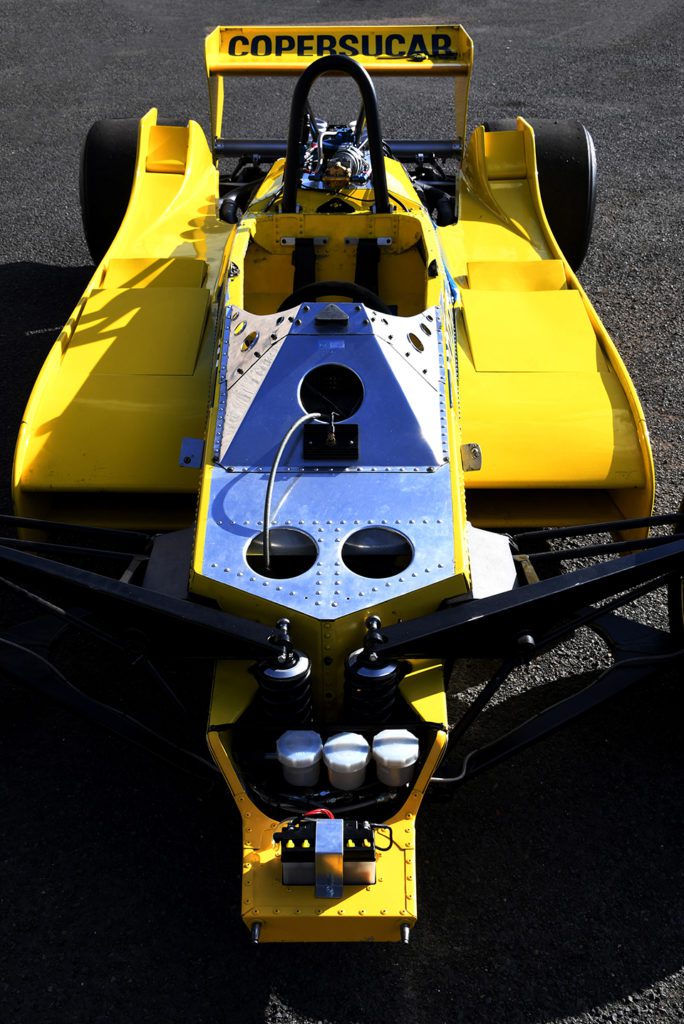 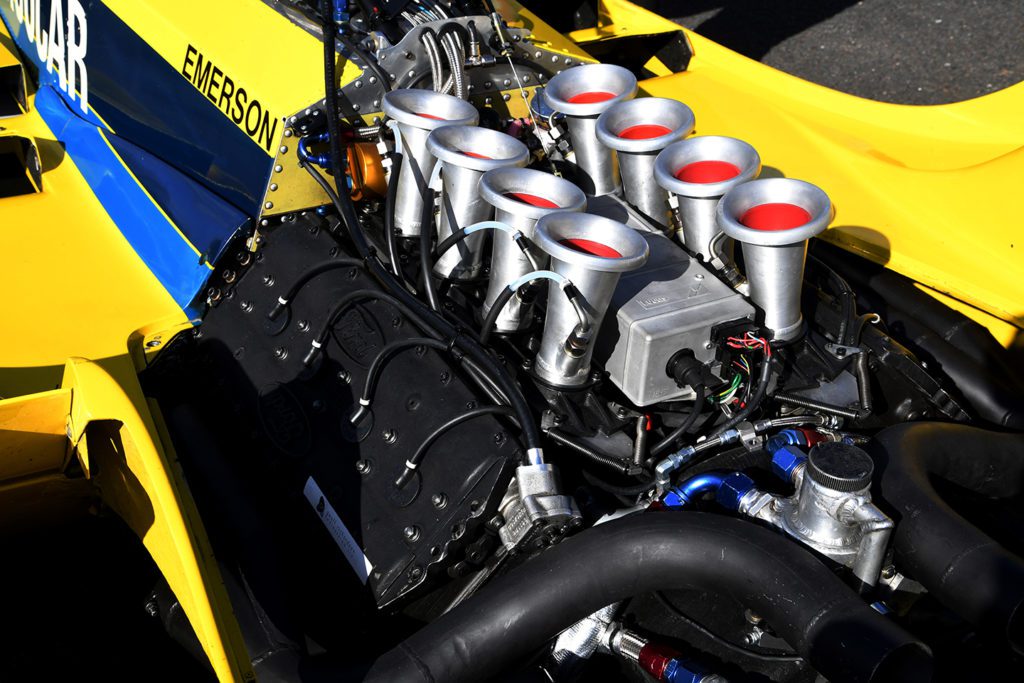 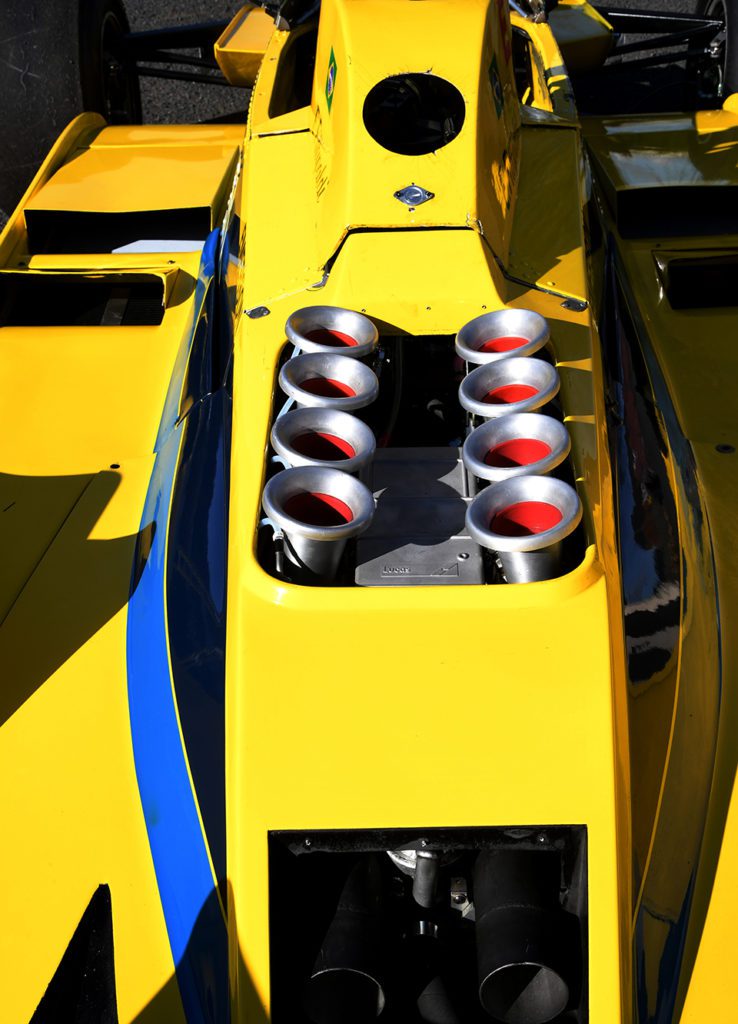 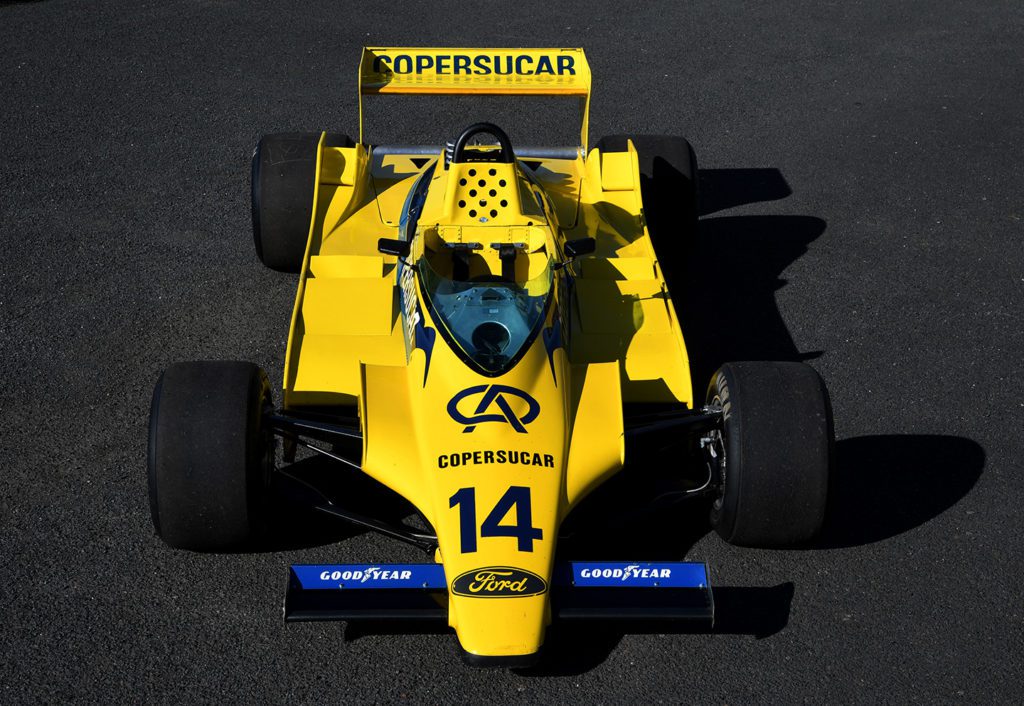 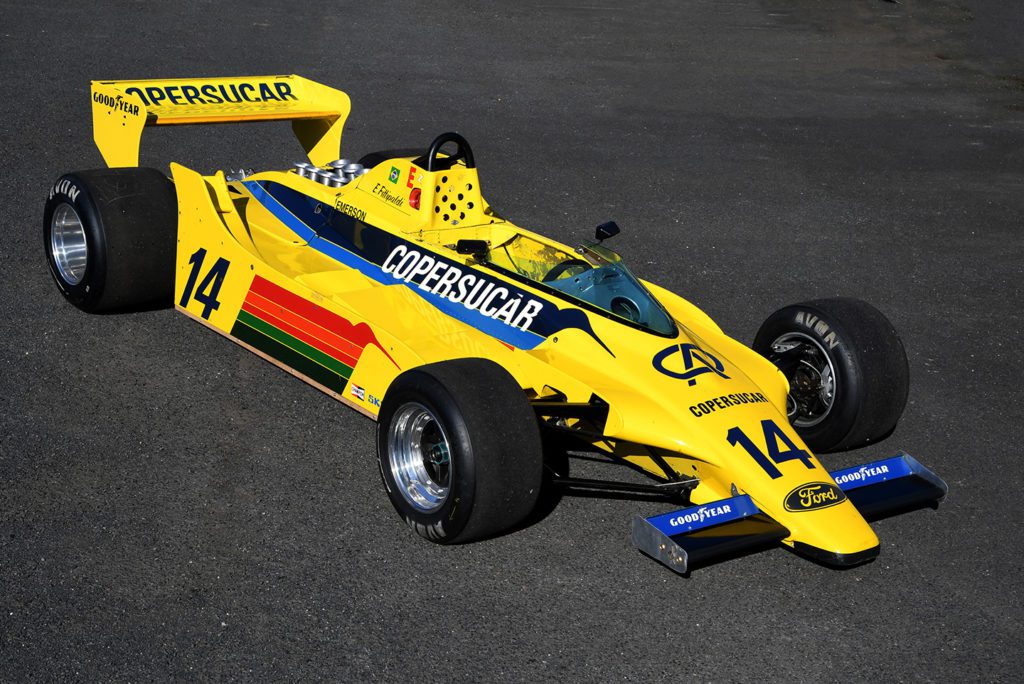 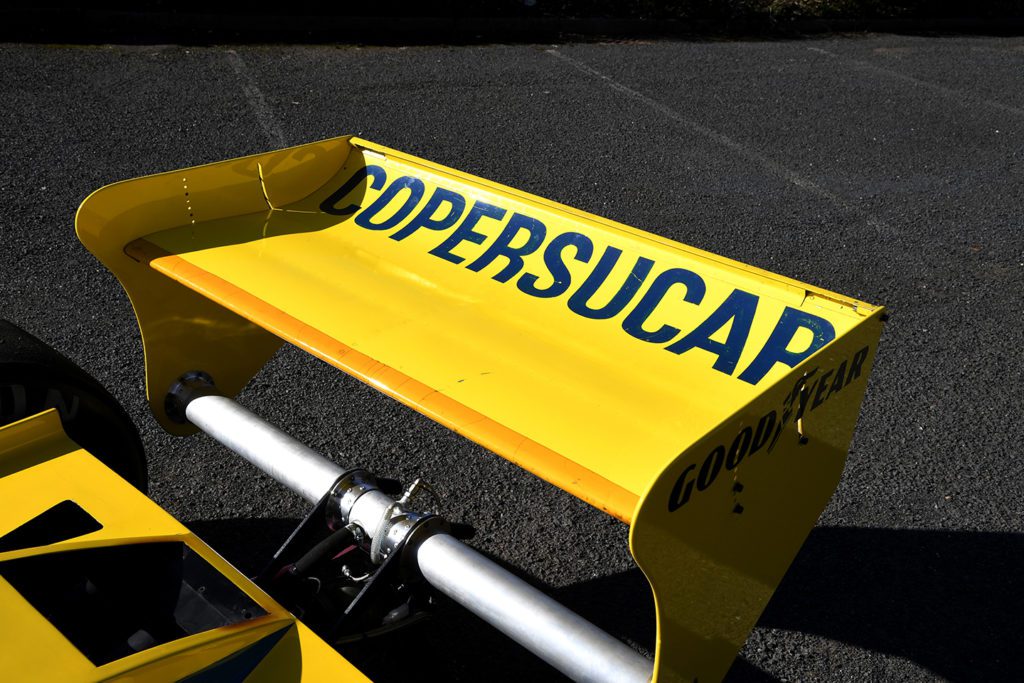 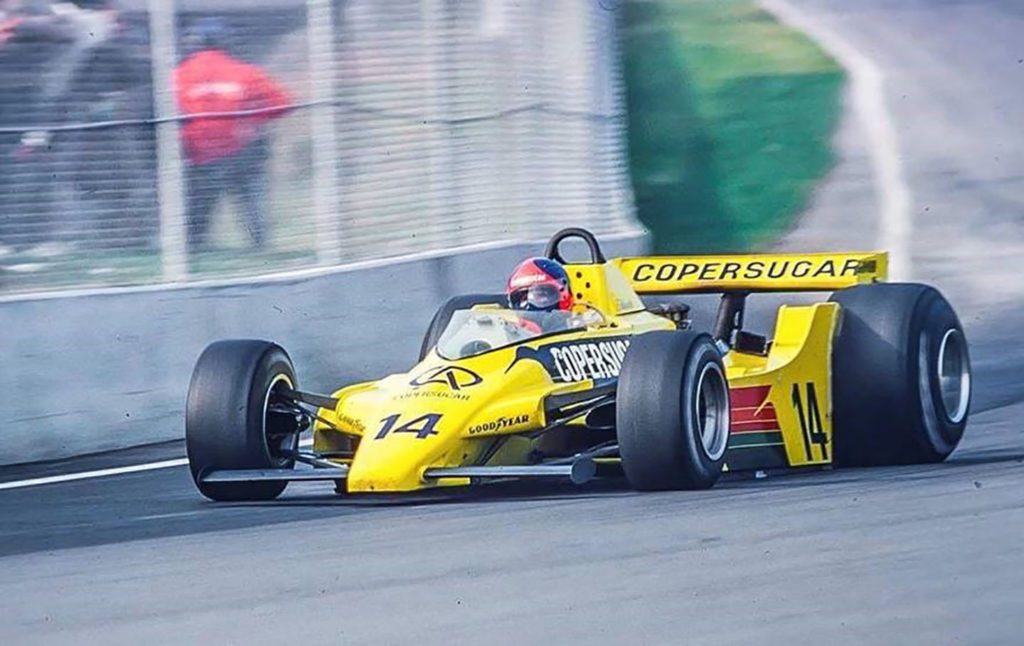 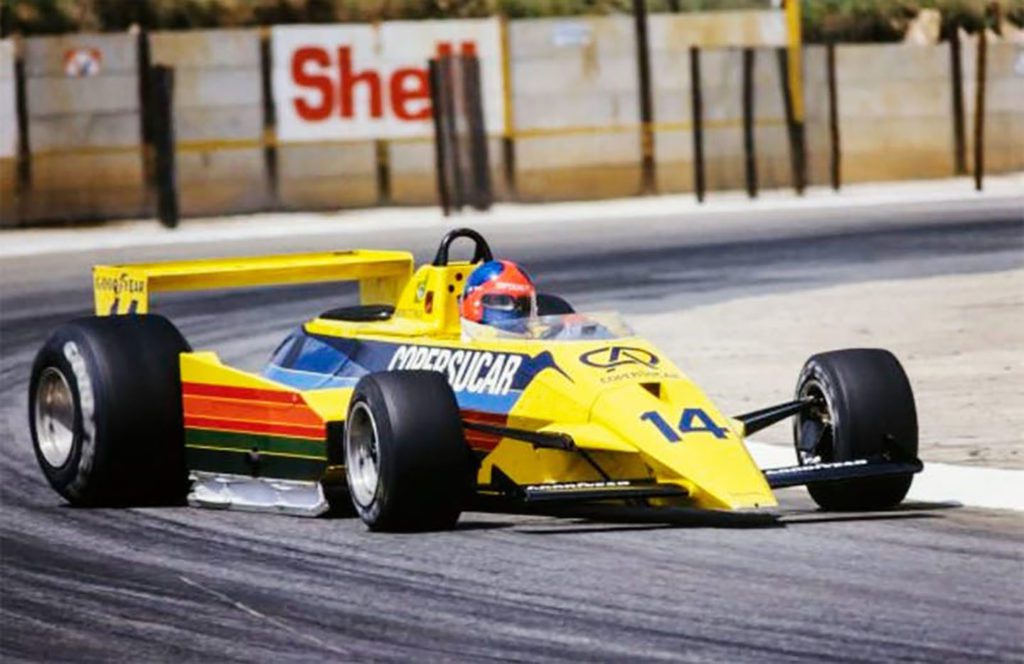 Founded by Wilson Fittipaldi with the backing of Brazilian sugar powerhouse Copersucar, the Fittipaldi team was in the ascendency following the relative success of the previous F5A with a 2nd place at the 1978 Brazilian GP. The team finished 7th in the Constructor’s championship despite fielding only one car for Wilson’s brother double World Champion Emerson Fittipaldi; more impressively this put them ahead of previous champions McLaren

This period of Formula 1 saw aerodynamic design radically evolve from rudimentary big wings to mastering ground effect, a dark art at the time which was tricky to master. With famed Lotus designer Ralph Bellamy having joined the team during 1978, his brief was to produce a car taking full advantage of ground effect using his experience of the Lotus 78, and this needed a radical departure from their previous designs. The resulting design was the F6 which featured short side pods and a visibly more aerodynamic profile in order to generate a favourable centre of pressure. Although the car was designed in England, the F6 was built by ex-Embraer aerospace engineers at the team’s state of the art Brazilian operation at the request of Copersucar.

Despite Bellamy’s best efforts, the single F6 proved to be troublesome and in the first four Grand Prix of the 1979 season Emerson raced it once at the South African GP where he qualified ahead of both Williams and finished 13th. Thinking the design ethos behind Bellamy’s car was flawed, Fittipaldi hired ex-Ferrari designers Giacomo Caliri and Luigi Marmiroli of FLY Studio to sort the F6; a sense of déjà vu must have been present as the some two engineers were responsible for redesigning the F5 into the quick F5A.

Compared to other major sports, Formula 1 is well known for having the highest rate of development and Fittipaldi with FLY Studio did an admirable job of transforming the F6 into the F6A midway through the season. The only major chassis component which wasn’t completely redesigned was the monocoque, which still benefited from additional strengthening tubes. The front and rear suspension was changed to rocker arm style (like the F5A) and longer side pods, inspired by the Williams FW07, appeared along with other aerodynamic improvements.

This car, F6A/1, was the first of two F6As and started life as the only F6 before its much needed upgrades. First used by Emerson in F6A specification at the 1979 German Grand Prix it was sidelined after 4 laps with electrical gremlins. At the following Austrian and Dutch Grand Prix Fittipaldi’s qualifying performances improved but further brake and electrical problems ended the car’s prospects in both races.

The F6A finally caught a break at Monza for the Italian Grand Prix where it finished 8th, just ahead of championship contender Alan Jones in his Williams. The Canadian Grand Prix would be the scene of the F6A’s best qualifying performance where Emerson placed the car on the grid ahead of both McLarens and many other respectable competitors; technical problems in the race denied Fittipaldi of a certain points finish but it still finished 8th. The final race of the season was at the US Grand Prix where the F6A achieved its best finish with 7th overall; as with the previous race, Emerson was denied another certain points finish by technical issues as drivers he had previously out-qualified finished ahead of him.

The development of the F6A showed great improvement and promise but it was too late to be capitalised on for the ’79 season. Fittipaldi went on to acquire the assets of Walter Wolf’s eponymous team including Harvey Postlethwaite who designed the replacement F7.

Following the ’79 season, F6A/1 was sold to the van Lepel collection and has a continuous known ownership history up to today. Bought by the current owner in 2013, a historic racer who has enjoyed great success in multiple categories, this Fittipaldi Grand Prix car has been subjected to a complete and sympathetic rebuild by Martin O’Connell (OC Racing), including the installation of a fresh Geoff Richardson built short stroke Cosworth DFV engine. Despite F6A/1’s highly original condition, O’Connell set an extraordinary lap of 1 minute 35.1 seconds during first testing at Estoril in February 2020, a time that would have put it on the front row for the previous Classic F1 pre-86 races there. With further testing this F6A could become even quicker, and with greater understanding of its period technical foibles this car is now ready to realise its full potential.